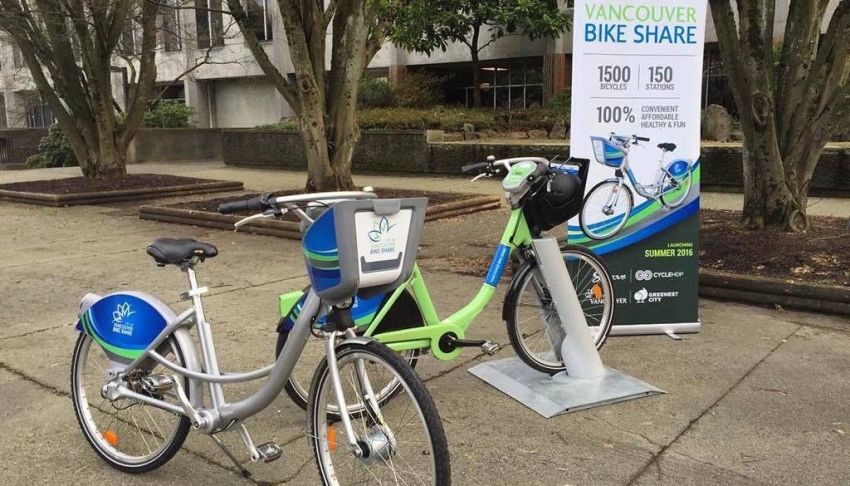 Vancouverites will be riding bike share bikes around the city by summer 2016.

Starting this summer, there will be a new way to get around Vancouver on two wheels. This week, the City of Vancouver announced its selection of CycleHop Canada as the operator of Vancouver’s public bike share (PBS) program.

“Vancouver's cycling numbers are skyrocketing and we've been hearing from many residents wanting a bike share network here,” says Mayor Gregor Robertson. “Public bike share will extend the reach of transit and walking trips and will be a great way for people to move around Vancouver, while supporting our Healthy City and Greenest City goals.”

The new system is expected to hit the streets in summer 2016. The launch will include 1,000 bicycles and 100 stations. An additional 500 bikes and 50 stations will be added by the end of 2016. The service area will include the Downtown Peninsula, extending to Arbutus Street, 16th Avenue, and Main Street.

“We are thrilled for the opportunity to establish and operate the bike share in Vancouver,” says Josh Squire, CycleHop Founder and CEO. “Vancouver is one of the best cycling cities in North America and an ideal place for quick bike share trips around town. CycleHop looks forward to serving the community with a new convenient and healthy transit option, starting this summer.”

Bikes will include helmets at no added cost

The bike share system will be privately operated by CycleHop, with equipment provided by Smoove SAS. The “Smart Bike” technology allows each bike to be unlocked and activated through an interface on the bike or a payment kiosk. Helmets will be available with bikes at no additional cost to the user.

“Smoove welcomes Vancouver to Smoove’s global bike share family,” says Laurent Mercat, CEO of Smoove. “I’m confident that the combination of our highly innovative bike share solutions, the dense urban environment of Vancouver, and the strong local cycling culture will all lead to a successful project that will bring Vancouver one step closer to its goal of becoming the greenest city in the world by 2020.”

The City will support Cyclehop with a $5 million fee for the launch and operation of PBS for 5 years. The City will further enable the system with in-kind support, including some station sites.

Staff will monitor the performance and progress of the system as the City moves towards achieving the City’s transportation and sustainability goals.

How will the Vancouver bike share helmet system work?