Khatsahlano is the first event to host the Binner Event Program that aims to raise innovative economic opportunities for one of the city's most marginalized communities. 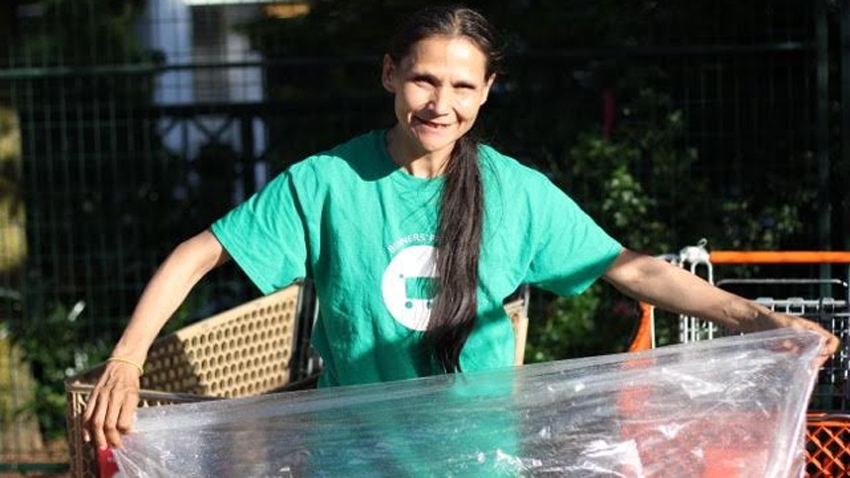 The Binners’ Project is a group of waste-pickers like Charlene who are dedicated to improving their economic opportunities and reducing the stigma they face as informal recyclable collectors. Photo by by Robin Weidner

City binners are regularly heard doing the back-lane rounds, returning items to depots and stores, but this weekend the urban recyclers will be taking centre stage at a Kitsilano festival.

On Saturday July 11, for the first time, binners will be part of a social innovation program at the West 4th Avenue Khatsahlano Street Party, to educate the public on recycling, monitor waste, and demonstrate their valuable contribution.

“I have been binning for over 15 years in Vancouver, and it wasn’t until I joined the Binners’ Project that I saw myself as a recycler,” says Michael Leland, Binners’ Project 'lead binner.'

At the end of the event, the binners will cash in the refundable containers they divert from the waste stream, enabling them to supplement their regular recycling income.

Khatsahlano is the first event to host the Binner Event Program, an innovative social pilot organized by the Binners’ Project that aims to raise innovative economic opportunities for one of the city's most marginalized communities.

Previous research on recycling at city events shows that attendees tend to be confused by the now-standard four-stream sorting recycling stations.

Already a number of other event organizers have reached out to the Binners’ Project with the objective of integrating binners in their events in response to a growing demand from the public for more events to be socially inclusive, rooted in their communities and geared towards waste reduction.

"Khatsahlano is Vancouver's largest street party," said Furness. "We’re hoping the binners can help us increase waste diversion and we are excited to include people from the community.”

Created in April 2014 with support from the J.W. McConnell Family Foundation, the Binners’ Project is a group of waste-pickers dedicated to improving their economic opportunities and reducing the stigma they face as informal recyclable collectors.

Over the past year, it has engaged more than 300 Vancouver binners through monthly meetings, workshops, and activities, such as the Coffee Cup Revolution in October 2014.

The Binners’ Project is a project on Tides Canada’s shared platform, which supports on-the-ground efforts to create uncommon solutions for the common good. Tides Canada is a national Canadian charity dedicated to a healthy environment, social equity, and economic prosperity.

Binners on the Job