Spartan Race in Vancouver: survival of the fittest 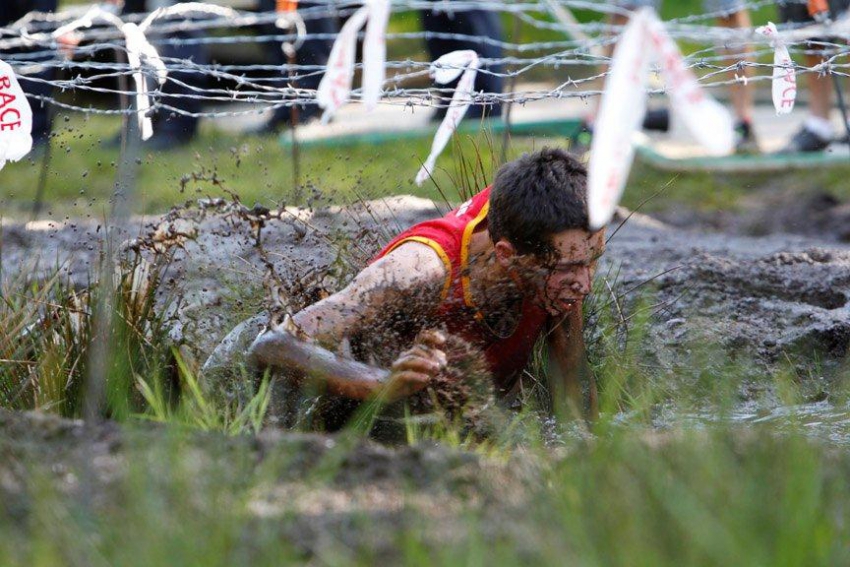 On a hot early day in North Vancouver, men and women shouted “Ha-ooh!” like Spartan soldiers on the battlefield before starting the obstacle course. Covered in head to toe with mud, they slogged through multiple obstacles under the blazing sun, in hopes of receiving medals from gladiators. About 2,500 racers were converted into warriors for a day at the Spartan Race on Saturday.

Like the Spartans from ancient Greece, participants pushed their strength and stamina to the limit in order to finish the race.

The grueling "Spartan Sprint" – a five-kilometre run through mud and obstacles – came to town after a tour all over North America and United Kingdom. Obstacles included jumping over fire, crawling through mud under barbed wire and climbing over walls.

Participants all ages from 14 to 62 were looking for a personal challenge and a fun time. Some of them were racing alone while others made teams with friends work mates, and family.

Jocelyn Chan and Katty Yu, two young women from Vancouver, joined the race wearing a toga and a Spartan hat to get the spirit.

“It was fun!" Chan said after the race. "It was really challenging. Running uphill and carrying the buckets in the forest were the most challenging part."

"It was punishment the whole way: first run, and then punishment. But the mud was nice,” Yu added.

Spartan Race: a bit of fun for everyone

“Almost anyone can do it,” Spartan Race marketing representative Katie Idle said. “It offers something for everyone – from the beginner athlete who is drawn by the challenge of crossing the finish line, to the seasoned athlete who is competing against the clock, himself and his colleagues.”

The race, which came to Vancouver for the first time last year, has seen a surge in popularity, thanks in part to the popularization of obstacle races on television.

“Compared to last year, we almost doubled the number of people signed up. I think they are looking for challenge. People want to push their limits and want to see how far they can push themselves," Idle said.

“The mission of the Spartan Race is to get everyone off their couches and out into the outdoors, encouraging a healthy and active lifestyle.”

Unlike other races, such as marathons or triathlons, the Spartan Race competitors didn't know the route until the day of the event, making the race a surprise for everyonne.

The first heat started at 9 a.m. and was filled with elite athletes, many of them police members and firefighters. North Vancouver mayor Richard Walton opened the first heat, while the main heat started at 10:30 a.m. until 2:30 p.m. every half an hour.

Little Spartans were also called on the battlefield. At noon, a kids’ race took place for children between five and 10 years old. These “Spartans in training” had to jump over bales of hay and crawl through a tunnel. One of the child participants, Dash Urban, joined the mini-course after his mother and her team finished the main race. When asked for his favourite part of the event, the young participant Dash Urban replied that he enjoyed climbing over the hay. Perhaps in a few years, he will join the other adults in the full Spartan Race.

Most of the racers agreed the most rewarding part was the jet propelled water splash after the race, which gave a refreshing cool-off after the work out.

Participants Peter Stoddart and Jackie Davies showed a sense of humour, showing up to the event in a white uniform, with the slogan "Got milk?" on their T-shirts.

“Somebody said we should show up in white today...we thought it was going to be clean fun, but then I saw some fire hoses and mud, ” Stoddart joked.

Even for participants who didn't get to finish, the lively music, food and free beer offered to the participants created a great atmosphere and made for an amazing weekend event.

For those who felt the Spartan Race wasn’t tough enough, the Super Spartan race, which is 12 km long, will take place on September 22 in Squamish, BC.