Sharing information is the city's best bet for improving public transit, according to panelists at Vancouver's 2012 Cities Summit. 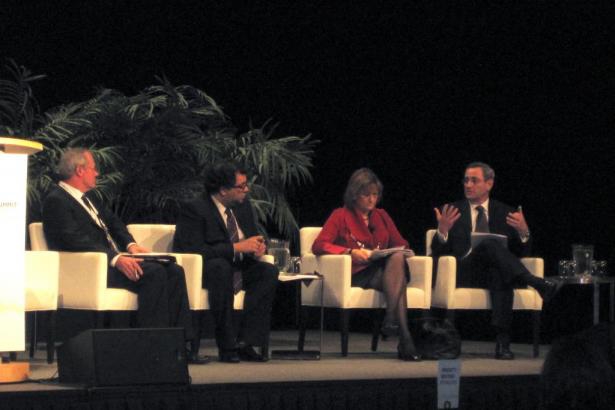 The future of public transit depends on smart technologies and data sharing, according to global civic leaders and innovators in Vancouver this week for the 2012 Cities Summit.

The first-ever summit, put on by the Vancouver Economic Commission, was created to tackle key issues and generate ideas in everything from urban planning to city financing. Organizers attracted an impressive lineup of speakers and panelists from all over the world, including city planners, policy makers, tech developers and executives. And throughout the event, there was one topic that came up again and again: urban transport.

“I think for a lot of cities, traffic and transport stands out as something that they want to improve, because it’s so visible and it’s so manifested in the daily life of ordinary people,” said Gordon Feller, Director of Cisco Systems’ Urban Innovations program.

Feller’s work with Cisco is focused around finding ways that technology can help solve urban problems. And among cities he’s worked with around the world, he says transit is one of the major areas where innovative tech-based solutions are being implemented.

Take Google Transit, for example. It’s a handy transportation planning tool—available to users worldwide through a computer or smartphone—that taps into local transit agency data to provide up-to-the-minute information on bus schedules and routes. But for it all to work, municipal transit authorities like TransLink must be on board so that Google can make use of their data.

By opening up data collected by different municipal departments and agencies, cities can offer new and creative services (like transit apps) with little cost to taxpayers.

“It’s not something that the city has to spend money to develop. Third parties will develop it, and the city can take advantage of it,” Feller explained during an interview.

“That’s the story that we’re increasingly seeing with the most successful cities, that transit and transport systems are being transformed not by the city’s own initiatives, but by third parties. And when the data is opened in the transit system, that can happen.”

In addition to creating new services, cities also have the opportunity to improve existing ones. For instance, if authorities can track which areas of the city have consistently poor transit service or where there’s a lack of parking space downtown, they can make better choices in deploying their resources.

According to professionals like Feller, both private agencies and public departments are already collecting all this data. The problem is that it’s not always getting to the right places.

“A lot of cities are not connecting their transport systems effectively to their information and communications systems, and we think that’s a perspective that has to be put front and centre,” said Feller.

It’s an idea that city politicians are increasingly starting to acknowledge. During the summit's opening panel on Wednesday, Calgary Mayor Naheed Nenshi repeatedly brought up transit as a top-priority issue for his citizens, emphasizing how important it is for agencies to make relevant information more available.

“I'm a bit obsessed with transit. If we can get transit to work better, if we can find a way for people to share data so they don't have to cue up for hours…that's a big thing,” said Nenshi.

“I'd really like transit to have its reliability statistics out there, and let people mix and match and see what's working and what isn't,” he said.

For Gerry Mooney, General Manager of IBM’s Global Smarter Cities, it’s important for officials to think of social media and technology as a two-way street. He says it’s not only useful to communicate information outwardly to citizens, but also to collect data directly from the public and take cues from what people are saying on the ground.

“It all comes down to what’s going on in my neighbourhood,” he said, explaining how individual concerns at the neighbourhood level can translate into positive change if communicated effectively.

“If we have smarter transportation, how does that impact me? Citizens really want to see it from the neighbourhood level, to the extent that you can take the data and now break it down to how it’s affecting each one of the neighbourhoods in a city where people live, that’s really important.”