The Saudi government is sending students west on scholarships that give them the freedom to both learn the language and understand cultures different than their own.  In the warmth of Kayan Mediterranean Cuisine, Nazanine Hozar dives into the world of  the hip, trendy, and unusually open-minded young people who have chosen Vancouver over New York, Melbourne and London as their destination. 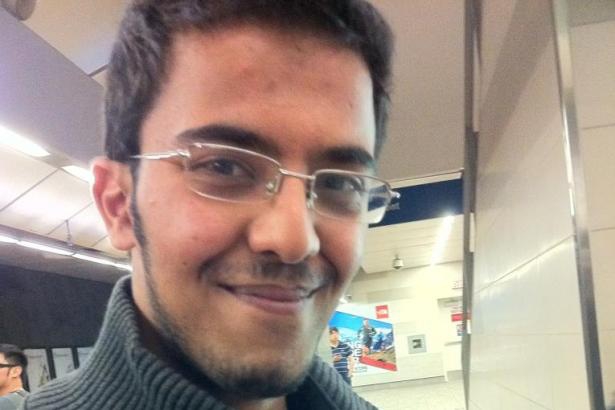 Photo of Abdullah by Nazanine Hozar

He sings, his tender but masculine bravado filling the room. My friends and I can’t understand a word of the Arabic lyrics, but the beautiful melancholy of his singing touches us.

Among the 30 or so people in the restaurant, half of them do understand Mohammad. Young Saudi men sing along and wave their hands from side to side.  They sway their heads, in part as a sincere sign of a investment in the moment, but also as a gesture affectation in the culture they come from.

The owner of Kayan is Oula Hamadeh, a Lebanese-Canadian who is strong, kind, warm, and lethal with her words. She has invited me here, both to dine and meet some of the Saudis that frequent her restaurant.

Over the past year-and-a-half, I, and the rest of Vancouver have become witnesses to a new phenomenon: young people from Saudi Arabia studying in Vancouver. They often hang out downtown, moving in groups of four or five friends, young men dressed in trendy street clothing. There are also are the couples, one pushing a baby stroller, the women’s head and face sometimes covered with a veil, walking beside her partner, gently speaking into his ear.

”What is happening with them coming here is so good, so important,” Oula said.

“You mean that having these young people come to the west, to Vancouver...”

“Is incredible,” she interrupts. “That finally they are learning what life here  is like, so that they’re no strangers to it. Who cares what anyone else thinks? This is so important.”

Oula's defensive comment is in response to an earlier conversation I had with one of her regular customers whom she introduced to me. Sultan, a 29-year-old doctor from Riyadh, Saudi Arabia, had criticized the influx of young Saudis men and women coming, fully funded, to Western countries (mainly Canada, Australia, The United Kingdom and the U.S.) to learn English.

“This has nothing to do with English,“ he told me. “There’s something else going on here. All these expenses could be used to help build the country, but it’s just being wasted here. And I assure you none of these kids will learn all that much English. When their scholarships are up, they’ll go back, still jobless, still unable to keep up with the rest of the world. There’s something else going on here, it’s not about English. All of this only started after 9/11.”

My conversation with Sultan had occurred on a Monday afternoon during one of Kayan’s quiet hours, the calm before the daily storm when dozens of young Arabs and Persians infiltrate the cozy restaurant to chat and dine and dance to Middle-Eastern pop music without the curious eyes of Canadians upon them. Oula – ever the great hostess – guided me to the few tables where the Saudi boys gathered and discussed, in low trebled voices, their experiences in the city.

One of them, a young man whose exuberance and 100-watt smile made him stand out from the crowd, jumped up to introduce himself.

“Abdullah,” he says, waiting for me to give him my name as well. His smile is infectious.

Abdullah comes from the city of Dammam. He takes me to a table where his friends are gathered, and quickly introduces them to me. His accent is heavy and he speaks so fast that I miss all their names and have to ask for them slowly once more. From Jeddah, Naif, is the oldest at 28, the father of a five-month-old girl and owner of the shyest eyes I’ve yet seen. Mero, also from Jeddah, is 26 and the father of a two-year-old-boy whom he and his wife left in the care of their parents in Saudi Arabia nine months ago; a decision that has hampered both of their experiences in the new city.

I ask him why they made such a drastic decision, to leave their child behind.

“Because we don’t know the child care system here. Don’t know if there is anyone good to take care of him.”

“My daughter is at a good daycare,” says Naif. This makes Mero smile.

“Yes, now we know. Now, we go back to Saudi Arabia and bring him back this time.”

Sitting in the corner, by the window (and serving as my translator), Abdullah shakes his head in disbelief. “I don’t have children, I’m too young for that, but when I heard this, I was so sad. It must be so difficult to be away from your baby like this.”

This leads me to my main question. Why have they come?

“For English,” says Naif. “Me and my wife, the government pays for us to come here and learn.”

Why they love Vancouver

But why Vancouver of all places? Why not New York, Sydney or Melbourne?