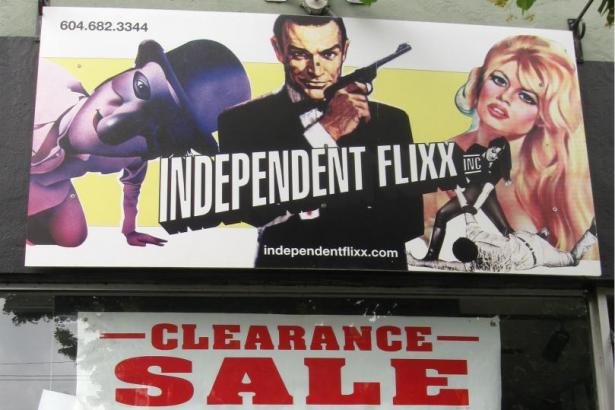 Independent Flixx on Denman Street will close at the end of the month after 12 years in business. With its colourful storefront and interior, the West End store is something of neighbourhood icon.

For the majority of its business, Independent Flixx has been a bustling boutique in the West End. The owner, Jamie Reynolds, pointed out that the empty shelves in his store were a vast change from the store's glory days, when the store was packed with approximately 12,000 DVDs -- many of them rare titles requested by customers.

Reynolds said the downturn for Independent Flixx didn't happen overnight; the increase in use of internet rental movies on a month-by-month and yearly basis caused a negative effect and within a short space of time revenues began to plummet.

“We noticed the rental market going down hill in 2008. We weathered the seasons, and the Olympics, and the hockey, but it's been consistently going down ever since."

The rise of online movie rentals has seen a significant change in how people rent and watch their favourite movies. Netflix, Redbox, or via simple internet piracy, the options for renting a movie or watching online are varied and plentiful. Rental providers can offer many of the same movies as neighbourhood stores for a fraction of the price. The cost for a monthly subscription to Netflix is $7.99, while Redbox offers movies at $1 per night. Aside from legitimate online movie rental services, there is also internet piracy websites that offer movie downloads for free. A quick search online for any recently released movie will often reveal a multitude of links where you can watch movies at zero cost. 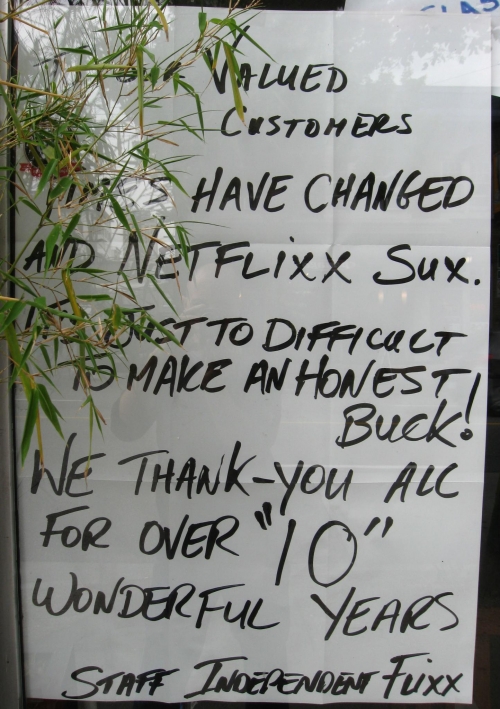 These cheap or illegal alternatives mean that video stores have to compete on price in order to retain customers. With overheads such as licenses, product purchases, and of course, building rental, this form of business is difficult to sustain over a long period of time.

“All our costs have been going up year by year," he said. "Our landlord wanted us to stay, so that was never an issue, but we just couldn't continue to operate.”

“I took it personally at first, but it's not my fault," he said, laying the blame on the ill-prepared film industry. "They saw this coming, and it's poor planning. The studios have reduced the cost of a movie and devalued  DVDs and movies in general. You can buy movies in supermarkets for $1. It's crazy.”

Besides owning his own video store, Jamie is also an avid film fan, and takes sharp jabs at phenomenon of online movie watching.

“Netflix takes away the fun," he said. "The whole internet thing reminds me of (people from) Wall-E. Large, gelatinous blobs just sitting around having everything they want at a touch of a button. The thought of paying to watch a movie online makes me sick. I rarely ever watch movies on my computer. It takes away the experience.”

Viewing experience is a key factor in this debate, but so is the customer experience, he argues. The face-to-face, eyeball-to-eyeball, word of mouth, fun, laughter and interaction that comes with walking into a store with an open mind and wandering out with a handful of movies to enjoy and explore.

“Ninety-nine per cent of our customers have been sad about it and many of them have been crying in the store," said Reynolds. "We'll miss the customers the most, but on a positive note, we have made many friends out of this."

In addition to Independent Flixx, the Blockbuster video store on Robson and Cardero Street is also slated to close this summer, which means that anyone in the West End looking for a movie to rent will have to travel further or simply begin to rent online -- not something that all Vancouverites, especially seniors, are willing to do.

"Times have changed and it's sad. The community feel is going and the neighbourhood loses out.”

Other recent closures in Vancouver include Giga DVD on Burrard, Happy Bats on Main, and the Hollywood Theatre on Broadway in Kitsilano.