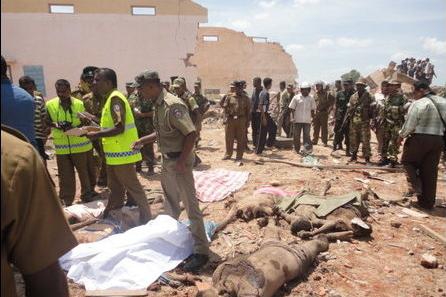 From Tamilnet.com, a picture of what Tamil refugees seeking asylum in Canada may have left behind.

Four Tamil women who docked at the Esquimalt Harbour, transported on the MV Sun Sea were released on September 17.  Refugee activist Leslie Hammond has been trying to find them food, clothing and housing.  She's concerned about their futures, as well as the futures of the remainder of the refugees who docked at Victoria mlitary base, seeking asylum in Canada. Hammond, who regularly volunteers at  “Prayers of People” at Saint Catherine's Anglican church in Port Coquitlam has urged other churches in the Lower Mainland to help the Tamil refugees. She said Canadian values must not be sacrificed on the alter of distorted fears.

“Some people have developed the paranoia of a country under siege from unknown enemies,” Hammond said, in a recent interview with the Vancouver Observer. "Recent developments....such as the Maher Arar affair, Muslim men being held in jail on security certificates, and the Canadian boy being held for 8 years without charge or trial in Gitmo,...etc. Our freedom has been compromised in the name of security" she said, adding that,  in a way, she blames the world-weary guilelessness of “ordinary Canadians.” What matters for families is to “put bread on the table...raise responsible children.” People aren't “aware of what government is doing in their name.”

She referred to comments made by Canadian Security Intelligence Service’s Director Richard Fadden on the eve of the G-20 Summit when he spoke of an “infiltration” by foreign governments, and on BC and Ontario political figures as “agents of influence/secret supporters.”

Public Safety Minister Vic Toews saw “the Sun Sea passengers as terrorists and criminals,” she said, adding that “his eyesight must be remarkable if he could see that all the way from his safe haven in Ottawa.”

She said she believes “that CSIS has information that is secret and possibly hidden under court orders that the general public is not privy to. I know that the BBC News asked to attend an open Commission on Lessons Learned and Reconciliaton to Northern Sri Lanka and the ‘authorities’ refused their request.”

"I called my MP James Moore to protest and was told they were not in jail and that they were in secure custody in detention centres. I made several calls to our MLA and Fin Donnelly MP and they suggested I call the Canadian Tamil Congress. I did. David Poopalapillai, National Spokesperson returned my call," Hammond said.

"Implied in our offer was emotional and social support, some household items, mattresses and linen kitchen equipment etc."

She was also looking to raise money for at least one month's rent.

Hammond knows that's not enough. She has urged other communities to actively step up and “live by the faith.” A press release by the Roman Catholic Archdiocese of Vancouver, Archbishop J. Michael Miller issued an important statement "...not demonizing refugees," she said.

Hammond said she fears that her efforts will not be taken seriously by the government. Hammond was directed to the Canadian Red Cross hoping that forming a relationship with them would demonstrate to the government that she can make a suitable place to house refugees.

It has been "the fashion for the Canadian Government to stand up in public and apologize to groups for past bad behaviour," she said. "We apologized to the Japanese Canadians, we apologized to the Chinese for the head tax, we apologized to the survivors of Indian Residential Schools. How valid is an apology if we don't learn from our past mistakes and keep treating people badly and against all the values Canadians hold dear? Canada has refused to issue visitors visas to any Sri Lankans for the past seven years. Canada does not have embassy staff in Sri Lanka to accept refugee claimants. There are seven thousand Tamil Canadians in the Vancouver Metro area. There are over 300,000 in Canada and most have arrived since 1983."