Vancouver Observer Celebrates Relaunch With a Call for More Voices

The Vancouver Observer celebrated the launch of a new website alongisde the release of its first print edition this week. Writer and blogger Susan Main was there at Ceili's Irish Pub on Tuesday. 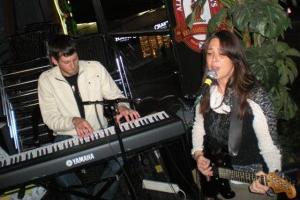 John Tanner and Rachael Chatoor at the VO Relaunch Party.

“We need a lot of voices in Vancouver,” said publisher Linda Solomon at the Vancouver Observer’s re-launch celebration at Ceili’s Irish Pub & Restaurant on Tuesday, Oct. 6. “Get behind us. Send us your blogs. Sign up for our newsletter. Tell your friends. Let’s make the media strong in Vancouver – and let’s just have a great time tonight!”

Musicians John Tanner and Rachael Chatoor entertained the crowd of about 200 bloggers, writers, web designers, and others. Some guests were from the Vancouver Bloggers Meetup.

“This city has so much going on in it – so many brilliant people, and the more the better,” Linda said. “We need thoughtful articles written by thoughtful people who develop a subject enough to help ordinary people make decisions about things that affect their lives.”

The cover story of the re-launched VO tells the story of Vancouver blogger Chris Shaw.

“Chris is being harassed a lot by security forces for his anti-Olympics work,” Linda said. “He has a really important voice – as do the people who are for the Olympics.”

Chris, and others, oppose the City of Vancouver’s 2010 Winter Games By-law (No. 9908) put in place July 23, 2009. They are filing a law suit against the the City and the Vancouver Olympics Committee, saying the new bylaw stops free speech.

Support from The Tyee

David Beers spoke at the party to share his support and encouragement. David launched The Tyee in 2003 to cover B.C news not found in corporate media. Some of the province’s top writers have contributed.

On the day of the VO’s re-launch party, Canwest filed for bankruptcy. Beers noted the irony.

“Let’s help build the next wave of media in the crumbling wreckage of the last one,” Beers said, encouraging us to support Linda and the VO by emailing, tweeting, and posting links on Facebook. “Spread all the really great things the Observer is going to find out – all the great ideas she’s going to uncover. Spread these far and wide in our community.”

“Dave has a vision and really knows how to take a project from start to finish in an amazing way. He is more than a Drupal developer,” Linda said. “After all this I still don’t know what the hell Drupal is. Dave, what is Drupal?”

Drupal is – according to its about page: “A free software package that allows an individual or a community of users to easily publish, manage and organize a wide variety of content on a website. Tens of thousands of people and organizations are using Drupal to power scores of different web sites.”

Be sure to check out more of Susan's writing at her blog, MainWriter.