The City of North Vancouver's key spokesperson, the mayor, believes the municipality is ready to face both a major earthquake and a chlorine leak at the Canexus Chemical plant. This scenario, though terrible to imagine, could occur, residents say---a chlorine leak caused by earthquake damage to the plant. Not everyone agrees with Mayor Richard Walton or thinks that the city is prepared.

They say the city's preparedness plan would fail  in the case of a chlorine accident caused by an earthquake.  They worry that residents would have no way of being informed of what to do or where to go, or how to keep themselves safe, if an earthquake were to compromise the infrastructure of the Canexus chlorine facility, which is located on the Burrard Inlet beneath the Second Narrows Bridge.

Mayor Walton praises Canexus's safety record when asked about whether he thinks the community is prepared.  An emergency management office officer noted that Canexus has funded the city's "Rapid Notify" alerting tool that relies on telephoning people about a disaster.

“The Canexus plant has been in our community for 53 years now and during this time period I have to say that they have been very good corporate citizens. They have been responsive. They have been in regular communication with our district staff. And in terms of them being a good corporate citizen, and a significant taxpayer in the community, we have no issues with Canexus management. The challenge of course is that the product is chlorine. And of course with chlorine, there is risk attached to it.”

Renata Elias, Emergency Planning Officer at the North Shore Emergency Management Office (NSEMO) said in an e-mail to The Vancouver Observer that there are plans in place should a large leak at the plant occur.

“The North Shore is one of only a few communities in the Lower Mainland that has an emergency notification system, RapidNotify. This alerting system is one tool that can be used to notify the general public in the event that emergency messaging needs to be conveyed. Other tools include going door-to-door (if applicable), in a patrol car or fire vehicle using a PA system, alerting the media (radio, TV, internet), and social media,” she wrote.

“RapidNotify works by automatically phoning homes and businesses in an affected area with a specific message. The message is delivered in a simple and clear format by voice. All calls are generated and tracked by computer to make sure every number is called - more than once if necessary. Answering systems will also record the message if residents are not home. RapidNotify currently uses white pages telephone data to create its database of phone numbers. However, this will change very shortly as we are nearing the implementation of Self-Registration, a new service from RapidNotify. This will allow residents and businesses to self-register landlines, cell phone number, pagers, email addresses and SMS texting.”

In her e-mail, she also wrote that RapidNotify is funded by Canexus as part of the company's Responsible Care Program.

But when asked, in a follow up email how the city would inform residents   in the event of a large earthquake with phones and electricity not functioning,  Elias gave the same answer.  Other than just notifying residents of a leak, Elias wrote that there are also procedures in place to  deal with a large chlorine leak, but she didn't address the issue of what would happen if roads were to buckle.

“The municipalities and first response agencies train and exercise individually and together as a region," she wrote.

David Stuart, Chief Administrative Officer at the District of North Vancouver,  reiterated  measures the city has conceived to deal with a emergencies, but didn't address chlorine directly, except to give a vote of confidence to Canexus, citing recent safety upgrades.

“In North Vancouver, we probably have one of the one of the more developed emergency planning cultures in the region,” Stuart said. “The district is at the forefront, I would argue, in looking at natural hazards and risk mitigation. In fact, it’s in my understanding that we are up for a United Nations award in the next month, recognizing all the work that we are doing in community resiliency in the face of natural hazards.”

Stuart also said that within the last three years, with work ending sometime late last year, the Canexus plant has been upgraded. 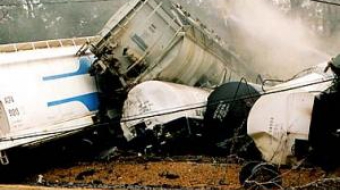 The Olympics offers Vancouver a "teachable moment," a hazardous materials expert says. But does Vancouver want to learn?
Linda Solomon WoodDec 1st, 2009
Speak up about this article on Facebook or Twitter. Do this by liking Vancouver Observer on Facebook or following us @Vanobserver on Twitter. We'd love to hear from you.