The company has 130 plants around the world and has said we’re not going to transport chlorine anymore. They say we’re in a regulatory environment. That means people are pissed off at them. People are saying it is outrageous to be shipping chlorine through major cities.

Clorox is not going to ship chlorine gas. They’re going to buy industrial bleach that’s already been made out of chlorine. Clorox Company is a very rich company. They’re not going to ship chlorine but they’re going to buy bleach from somebody else. Clorox may be buying industrial bleach from a company in Vancouver. Canexus will be shipping chlorine and some other company will be using it. Clorox is trying to protect their deep pockets by buying only bleach, not chlorine gas.

If Canexus has a terrible release and it kills 10,000 people, Canexus will go bankrupt and they’ll just walk away. The people in Burnaby or Vancouver won’t have someone they can sue. Clorox wants to get out of legal liability.

There is one other possibility besides terrorism why Canexus is storing dozens of chlorine tank cars 150 feet from homes in Belmont, WA. Maybe the price of Canexus-origin chlorine gas has plummeted. Or perhaps it has dropped relative to other producers desperate to get rid of their waste product such as US
Magnesium in Utah, another disastrously sited plant regarding getting rid of waste chlorine from magnesium production.

The US Naval research lab said in testimony in the Washington DC city council on re-routing, which they enacted on a 10-1 vote. The bill said if you’re bringing chlorine gas and other hazardous cargos through this city and you don’t have an origin or destination in this area, go around.

The thing that Canadians….you know that those cargos are mainly going to the United States from Vancouver. There was a comment to your [Linda Solomon and Megan Stewart's] article [on The Tyee] that said, 'well, this is because you have a comparative advantage, Canexus has an advantage where it is that they can sell it to the US. Canexus is the most disasterously sited chlorine production plant in North America. They are trying to ship to customers mostly in the US. Their huge long transportation routes involves routes through major cities. Why would anybody think it’s a good idea to have a chlorine production plant in N. America that is going to sell to customers way way across the US. Isn’t that costly? It is. That’s because chlorine is a waste product. It’s being produced in N. Van as a waste product. Ever since the beginning of history, chlorine has been produced as a byproduct of sodium hydroxide. It’s a very valuable chemical. It’s extremely valuable as a feedstock for other uses.

The Houston fire chief had his local community emergency planning committee, the local emergency planning committee did Vulnerable Zone Map around the chemical facilities in Houston. That means you draw these circles of the people at risk from a worse case release, showing who is at risk from a leak from these facilities. The vulnerable zone in Houston covered 94 schools and 14 hospitals. When the fire chief got that report from this committee, he stuck it in the basement of city hall and didn’t show anybody for five months. The Houston Post found out about it and put it on the front page of the paper and interviewed the fire chief and said, "why are you suppressing this important data?"

The chief said the classic answer: "Well, I didn’t want to alarm the people of Houston."

Information won't hurt you, but chlorine could

The West County Times in Contra Costa County, North of San Francisco, did a two-page spread of Vulnerable Zones graphics, Dec 13, 1993. This full two-page colour spread showed the vulnerable zones around the plants and Western Civilization did not fall to its knees.

The companies and the local officials who know have to be forced to give the information to the public and that takes a map. You have to show the public in a graphic way what could happen.

What the map would show you:

The vulnerable zone in Vancouver would be 15-mile zone on each side of the track....and the actual release is only going to impact people in a much more narrow zone under the plume.

Steve Flynn of the US Homeland security official did a scenario of a toxic chemical attack in Philadelphia that could produce a cloud over the city that would go over the local baseball stadium…that was his scenario…That’s in his book, "The Edge of Disaster."

Even the US is unprepared.

Former Chairman Carolyn Merritt of the US Chem Safety Board said US communities are unprepared. She compared them to Bhopal. There are lovely safety videos on the website on the Emergency Response's lack of preparedness in the US. The official title is Chemical Safety and Hazard Investigation Board.

Communities are unprepared and this board is worried that citizens aren’t taking this stuff seriously because they are uninformed. 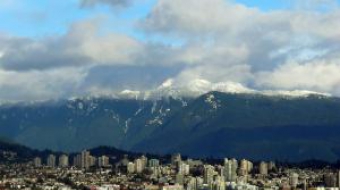 The City of North Vancouver's key spokesperson, the mayor, believes the municipality is ready to face both a major earthquake and a chlorine leak at the Canexus Chemical plant. This scenario, though...
Jocelyn GollnerMar 31st, 2011
Speak up about this article on Facebook or Twitter. Do this by liking Vancouver Observer on Facebook or following us @Vanobserver on Twitter. We'd love to hear from you.