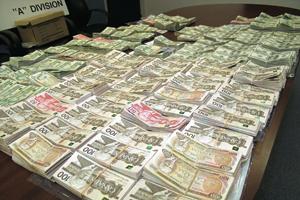 In the shadowy underworld of organized crime, casinos are an ideal place to turn dirty money into legitimate cash, according to a spokesperson from FINTRAC, the federal agency that monitors cases of suspected money laundering and terrorist financing. Casinos have been identified around the world as vulnerable to money laundering and those in BC are no exception, Peter Lamey, spokesperson, said.

"Casinos may appeal to people because they can perform transactions with a great deal of anonymity," he said.

A common scenario involves a drug trafficker with large amounts of cash to convert, Stephen Schneider, professor of criminology at St. Mary's University and author of the book Iced: A History of Organized Crime in Canada, said. "They’ll go to a casino, play a few games, come back, cash their chips and get a cheque."

Any increase in population, will increase crime rates, Sgt. Dave Gray, of the B.C. RCMP’s Integrated Proceeds of Crime unit, said in regards to a potential increase in money laundering due to the expansion and relocation of Edgewater Casino to BC Place.

"The casino has the responsibility to do what they can, but I’m not sure that they have to go beyond that. They’re running a legal business. The cost of extra policing would most likely fall on the taxpayer," Gray said.

A 2006 joint Canada-US Organized Crime Threat Assessment report stated that "the fact that currency in casinos is largely exchanged in the form of chips and stored value cards renders the traceability of funds difficult." The report also stated that casinos in both Canada and the U.S. wire funds across the border.

In the last ten years FINTRAC has referred 2000 cases to police on reasonable grounds for an investigation into money laundering. 20% of those involved some kind of casino transaction, Lamey said. 95% were related to financial institution transactions and 35% involved money service businesses (e.g. Western Union). Casinos were the third most common place for money laundering.

Sgt. Gray told VO that it is difficult to estimate the extent of money laundering. "It totals trillions of dollars globally. The Financial Action Task Force [an inter-governmental body that combats money laundering and terrorist financing] has given up trying to give an estimate."

By law, casinos in Canada are required to report cash transactions over ten thousand dollars to FINTRAC. They are also required to train their staff to pick up on suspicious activity and implement a compliance regime, spokesperson Lamey said.

In a series of articles published this summer, The Vancouver Sun revealed that the system for combating money laundering in B.C. has major weaknesses.

B.C Lotteries Corp. was fined $670,000 by FINTRAC for 1,000 violations  of the Federal Proceeds of Crime and Terrorist Financing Act. At the time, then-Solicitor General Mike de Jong said he was concerned about the potential for organized crime to misuse B.C. casinos and online gaming.

Current Solicitor General Rich Coleman did not respond to VO's requests for an interview.

An internal RCMP report obtained by The Sun found that money laundering by organized crimes is widespead in Canadian casinos, but due to lack of resources and other priorities, police are doing very little to fight it.

Sgt. Gray told The Sun that not a single person has been charged with money laundering at B.C.'s casinos in recent memory.

When contacted by VO, a BCLC spokesperson said that BCLC has filed an appeal with the federal court of appeal of the administrative penality levied by FINTRAC. They declined to comment further on the case. The spokesperson also said that BCLC  had submitted 37, 000 reports to FINTRAC last year and that number is expected to reach 50, 000 this year.