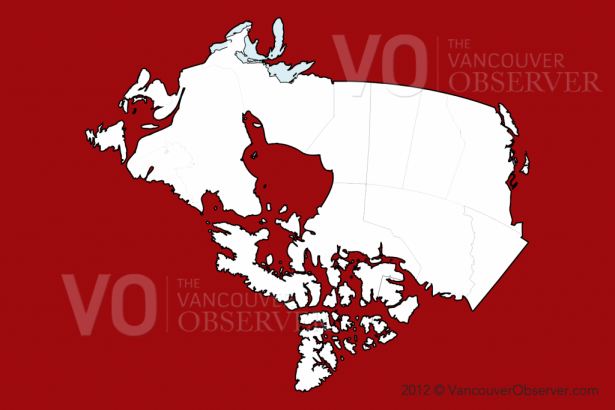 This is the story of the Harper government's attack on the world's most respected foundations, organizations which only a short time ago, the government regarded not only as friends, but key strategic partners in improving the quality of life in this country.  It started with an attack on science when the Canadian government made it clear it preferred its scientists the way the Victorians preferred their children:

“Be seen and not heard, and speak when you are spoken to.”

In Dark Age Ahead, the foreboding work that closed her career and life, the Canadian urban criticism giant Jane Jacobs pointed to decay in the critical and effective practice of science as one harbinger of cultural collapse in modern civilization.

Jacobs had reason for concern, because science in Canada is under the strongest attack in living memory.

In a move that stunned the global scientific community, in March 2010 the Canadian government forbade government scientists from discussing their findings in public without permission. This development brought a storm of censure from the global scientific community, from internationally acclaimed academic journal Nature, the World Federation of Science Journalists, the Canadian Science Writers Association and leading Canadian academics.

It is not only scientific conclusions and opinions that are being suppressed. In the name of cutting expenses, valuable research activities, facilities and programs are being cut as well. One example is the closure of Canada’s, and the world’s only pristine freshwater environment research facility, the Experimental Lakes Area in Ontario. This move again drew international criticism from world leading scientists, academics, researchers, as well as scientific associations from Israel to the Smithsonian Environmental Research Centre.

In an era where budget restraints limit neither our multi-billion dollar fighter jet program nor the building of prisons to cope with an as-yet undetected crime wave, the shuttering of scientific research facilities speaks volumes.

And most recently, the Canadian government opened another front in its attack on science, challenging Canadian conservation based non-profits and advocacy groups that accept donations from reputable American charitable foundations.

In an open letter to Canadians in January, Natural Resources Minister Joe Oliver came out swinging against “environmental and other radical groups", singling out “jet-setting celebrities” that seek to influence Canadian policy and public opinion on resource extraction and development projects such as the proposed Enbridge pipeline.

In our own Senate, Conservative Senator Donald Plett rose to liken US charitable foundations to terrorist groups such as “Al Qaeda, Hamas and the Taliban.” To the braying of Senator Mike Duffy, who called them “anti-Canadian,” Senator Percy Mockler announced to his fellow Senators: “…I want to bring to your attention some of the qualified bad, not to mention ugly, foundations, namely…” then read their names to be recorded in Hansard for posterity.

When scientists become the enemy of government, the language shifts, and suddenly they are “environmentalists” and “radicals” “bad” and “anti-Canadian.”

This is a very bizarre twist, and here’s why:

Five years ago, the Harper government was thrilled to do business on exactly the model that it now vilifies as anti-Canadian money laundering. It entered into a conservation agreement to protect the Great Bear Rainforest in partnership with several American foundations in an agreement negotiated by Tides Canada.

The Harper and BC governments both put in $30 million each, while

The Gordon and Betty Moore Foundation put in $10 million of the amount that foundations gave to match the government's $60 million. With funds topped up by other major foundations including both Packard and Hewlett, the total funding commitment from all parties came to $120 million--almost half of which was provided by these same American foundations.

At the time, Environment Minister John Baird applauded the historic agreement, and said that the government acted out of concern that the $60 million raised by Tides Canada was in jeopardy of being lost. "I was tremendously concerned . . . that we could lose that, particularly the money coming from abroad*, so we didn't want to have that happen," Baird said at a Vancouver event where he shared the stage and microphone with First Nations leaders and Tides chief executive Ross McMillan.

Everything was going so smoothly, when all of a sudden…

Out of the blue came a great rending of garments and gnashing of teeth over a completely open and transparent process in which the Harper government itself was an active participant. The attack, when it came, was fierce and ruthless.

What on earth happened to bring it on?

Context, of course, is everything. In January of this year, Barack Obama bowed to pressure south of the border and shelved the Keystone XL pipeline expansion carrying Canadian oil to the Gulf of Mexico, adversely affecting the price Canada can get for our oil.

Suddenly, the Enbridge Northern Gateway pipeline route looked like the only way for Alberta oil to get to Asia and other markets, where it could probably command a much higher price.

Suddenly that conservation deal with Tides Canada and all those American foundations didn’t look so good. Check out this cool map from National Geographic showing the location of the proposed Enbridge pipeline port in Kitimat. Right in the middle of the Great Bear Rainforest's waters. 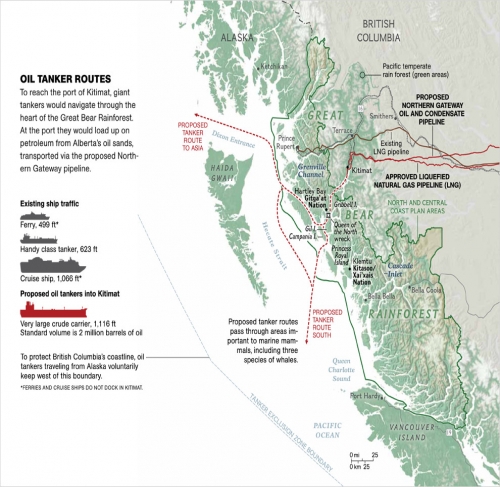 Because it is here in Kitimat, and in BC’s protected forests and coastal waters, that the Enbridge pipeline proposal will meet its fiercest opposition.

Here’s a fair question. Does the location of the proposed Northern Gateway tanker route through the protected waters and coastline of the Great Bear Rainforest -- funded by the Moore, Hewlett and Packard foundations in a Tides Canada deal -- have anything to do with the fact that all of these organizations are now being pilloried by the very government that partnered with them?

Has the federal government decided to get out of the Great Bear Rainforest partnership, and calculated that the best way is to vilify and smear its own partners?

Meanwhile, it might be worth getting to know if we’ve really been palling around with terrorists.

Here then, are some of the American foundations which have been named and accused by our government of fraudulent money-laundering and “ugly” “anti-Canadian” conduct:

The William and Flora Hewlett Foundation

Overview
The world’s tenth largest charitable foundation, the Hewlett Foundation was established in 1966 and manages $7.4 billion in assets.  It is a global foundation active in education, the environment, global development and population, the performing arts and promoting philanthropy.
Hewlett advances land, water and energy conservation in 12 states and 3 Canadian provinces, as well as Europe, China and Latin America.

The David and Lucile Packard Foundation

Established in 1964, and managing $6.3 billion in assets, the David and Lucile Packard Foundation is the 16th largest charitable foundation in the world.  It seeks global impact in population and reproductive health; and science and conservation.
In the field of conservation and science, the foundation seeks to drive change to support the world’s fisheries, pioneer new approaches to the conservation of ecosystems in California, the Gulf of California, Western Pacific Ocean, and the North American west.

Overview:
Founded in 2000, the Moore Foundation is the 20th largest in the world, and manages nearly $6 billion in assets. The foundation strategy is to make fewer gifts with substantial global impact in the fields of environmental conservation and science.
Moore major gifts include:

Maybe they could pick up the tab and save the Experimental Lakes Area.