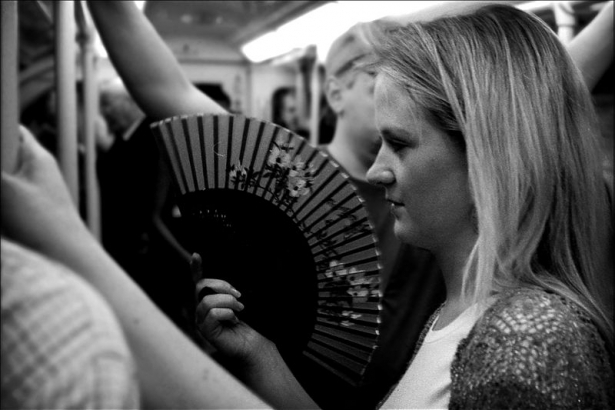 As the train lumbered into the station, I could feel a collective groan down the platform. Kings Cross Underground Station - 6:28 p.m. on a Monday.

Summer had finally come to London. After a seemingly endless parade of grey and rain and days that started off blue only to turn on you by lunch time, summer arrived this weekend (no, really, it's been bad. Even for someone who grew up in Vancouver, it's been depressing). Just in time for an extra four million people to cram themselves into London's already overworked transport system – onto trains, buses and down the narrow, twisting passages that link up the different lines at the station.

The tube: a sweltering, sweaty ride

It's hot underground. As anyone who's ever taken any kind of subterranean journey knows all too well, body heat combined with the energy of trains hurtling down dark tunnels can make for a sweltering, sweaty ride.

Now I don't like taking the tube at the best of times. I don't like having to sit across from complete strangers staring awkwardly at your feet or the adverts, or anything, anything to avoid eye contact (this is Britain, after all). Nor do I enjoy rush hour on the tube and having to stand in someone's arm pit – or as I experienced during one particularly unpleasant journey – close enough to the man next to me to feel his stomach sink in and out as he breathed.

No, taking the tube is not one of the reasons I enjoy living in London. The culture, the history, the possibilities, the diversity, the confluence of cultures, even the strange way British people have of getting to know you by making fun of you – all, that I will embrace.

But the tube? It is a blight on my London experience, miracle of transportation and commuting notwithstanding.

But I have to get to work, so there's not much I can do about it.

So at 6:28 p.m. on a Monday evening, I found myself crammed onto the platform at Kings Cross Station waiting for the next train to High Barnet. The driver waited for all the passengers to get off and then those of us on the platform had approximately 1.67 seconds to push our way into the train. The doors nearly shut on one passenger's head.

And we were off.

The teenager next to me unfurled his headphones while shimmering beads of sweat ran rivers down his forehead before coming to rest on his moistened bangs. He fiddled around for his iPod, flicked sweat off his forehead and sighed. Opposite us, a woman with a very fancy looking camera sneezed-coughed into her hand. Again. And again.

It's not long after moving to London that you start to resent "the tourists." The way they stand in your way staring at the tube maps when you have mastered the underground. The way they helplessly ask for directions and the way they call Oxford Street "Oxford." It's very easy to forget that you are basically a tourist and have no idea what you're doing once you leave the small postage stamp-sized corner of London that you like to call your own.

We rolled into Euston Station. The teenager turned up his music slightly. Several men in suits got off. So does a family with a small child who has been mercifully quiet the entire journey.

Much to my dismay, however, the car seemed no emptier than it had been before.

Every day, when I take the tube from London Bridge after work (I just happened to be at King's Cross on this particular day), I am greeted by the booming voice of Boris Johnson, mayor of London. He has apparently decided to recite a poem in ancient Greek in honour of the Olympics, warning me that the station will be extra busy during the games.

"Don't get caught out!" booms his disembodied voice.

Meanwhile, a Canadian friend of mine who works in central London was warned, during a special "Olympics preparation day" that it may take up to five hours to get to work.

Let me tell you, she is over the moon about spending five hours on a sweaty train, only to deal with customer service complaints from tired and over-extended tourists.

At Camden town, I think I'm going to pass out.

But I'm stuck in the back of the last carriage of the train and the doors don't open at this particular station. I am trapped. Trapped with the teenager who's blasting Justin Bieber (why, Canada? Why?!) Trapped with the two pretentious young acquaintances of some rising star in the academic world, barely concealing their jealousy as they talk. And trapped with the tourist who (come to think of it) might have already have passed out because I haven't heard her sneeze-cough for a while.

Before I got on the tube that evening, my colleague and I were discussing if it would be safe for her to cycle to work. Since she lives in Stratford, where many of the events are taking place, cycling seemed a good option to her. After having seen a cyclist almost get hit by a car earlier in the day, I was actively trying to discourage the plan. But I now am starting to see a certain logic in it.

A woman to my left opened a copy of the Evening Standard. "Are you ready for the games?" asked a full page ad from Transport For London.