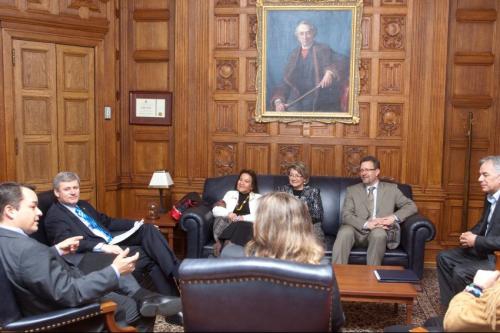 Danielnpaul.com explains the history of First Nations exclusion to voting rights and eventual suffrage like this:

"In 1960, under Prime Minister John Diefenbaker's enlightened thinking, the government made a decision that would prove to be most beneficial in promoting the eventual recognition of the civil and human rights of First Nations citizens. It decided to permit all Registered Indians to vote in federal elections. Registered Indians living on-Reserve had previously been prevented from doing so by this section of the Canada Elections Act:

14. (2) The following persons are disqualified from voting in an election and incapable of being registered as electors and shall not vote nor be so registered, that is to say, ...
(e) every Indian, as defined in the Indian Act, ordinarily resident on a reserve, unless
(i) he was a member of His Majesty's Forces during World War I or World War II, or was a member of the Canadian Forces who served on active service subsequent to the 9th day of September, 1950, or
(ii) he executed a waiver, in a form prescribed by the Minister of Citizenship and Immigration, of exemptions under the Indian Act from taxation on and in respect of personal property, and subsequent to the execution of such waiver a writ has issued ordering an election in any electoral district.

An "Act to Amend the Canada Elections Act," repealing the discriminatory parts of Section 14, was given royal assent on March 31, 1960.."