Friday Comes Only Once a Week

At the real estate agency's coffee machine, there was quite the line up.

Chloe, just in from showing a home on Blenheim to an elderly couple with a dog, Annette, fresh in from the gym and looking slightly flushed and still wearing her Lulu Lemon jogging suit, and Priscilla, their boss, all waited for Mr. Berger to finish putting sugar in his coffee.

"I'm going on a date with a guy from POOF," Chloe said.

"I know that site," Annette said.

"Well, I call it POF." Mr. Berger opened a pack of sugar. "Who doesn't know of it?" he said in his silvery voice. "Such bad software.  But worth millions.  Some guy living in a small apartment in Yaletown made it."

"My roommate registered me for it without my knowledge," Annette told Chloe and Mr. Berger.  "I only realized when I started getting t he emails when I was in the middle of my Real Estate and the Art of Schmoozing at BCIT last night," Annette said.

"Are you guys talking about POF?" Priscilla said.

Chloe and Annette laughed and Mr. Berger turned around with a lascivious grin.

All four realized they were each playing the dating game--- on the site.

Priscilla, dressed in a black Italian skirt and jacket, her long hair pulled back into a tight bun, beamed.  "I'm going out with the hottest forty-year-old with horn rimmed glasses.  I really go for that librarian look," she said.

Priscilla was obviously upset.  "Uh, yes...I do mean him," she said.

Mr. Berger said, "Did he tell you you have a nice smile, the nicest he's ever seen?"

"Oh, my God," Chloe said.  "He's just like Mr.CutandPaste101. He emailed me the same note twice, the second time after I'd changed my profile picture."

An uncomfortable silence followed and then the four realtors each went back to their desks and opened their computers to see if they had new correspondence from the POF website.  Afterall, Friday comes only once a week.

More in The Wild West 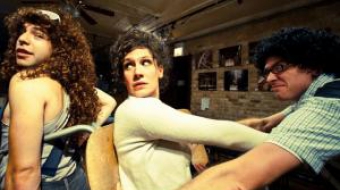 I was putting on my jacket and whacked you in the process. You're totally cute.
AnonymousApr 6th, 2008

What people don't know about Vancouver is that it is hot, hot, hot, triple X hot, but largely online. Hmmmm. Sex, Lies and Lotusland is a fictional blog by a group of writers exploring dating in the...
AnonymousSep 4th, 2009

Sex, Lies and Lotusland is a fictional blog by Anonymous The sultry sun, a tempestuous voyeur, laps at the curves of our dewy bodies, spying with its warm touch through the gauzy veil of bone white...
AnonymousAug 25th, 2009
Speak up about this article on Facebook or Twitter. Do this by liking Vancouver Observer on Facebook or following us @Vanobserver on Twitter. We'd love to hear from you.