No right to water in Canada 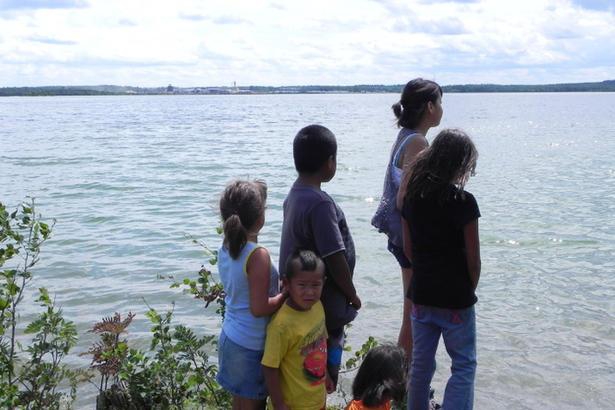 Last August, the Constance Lake First Nation community of 900 were without water in Northern Ontario.  Photograph of children looking out over lake polluted with thick, blue-green algae by Chief Arthur Moore.

If you live in North America, it turns out that you’re much more likely to have access to clean drinking water if you’re wealthy, white and don’t live in a rural area or a First Nations’ community.

The situation is getting so bad that international human rights authorities are sending in experts to investigate and to shine a light on the problem.    The UN’s Independent Expert on the “right to water” recently completed a two week tour of the United States and the results are troubling.

UN independent expert Catarina de Albuquerque said: “I am concerned that several laws, policies and practices, while appearing neutral at face value, have a disproportionate impact on the enjoyment of human rights by certain groups.”

Quoting a study on the racial impact of water pricing and shut-off policies of the Boston Water and Sewer Commission, she noted that for every one per cent increase in a Boston ward’s percentage of people of colour, the number of threatened cut offs increases by 4 per cent.   The report also notes problems with drinking water in small communities and in Native American communities.

Pointing out instances where the US fails to protect the most vulnerable is like shooting fish in a barrel.   Is equal access to clean drinking water yet another situation – like health care and gun control - where Canadians can look at Americans with mixed feelings of pity and superiority?   Unfortunately, the situation is not much different here.

Last year I co-authored Seeking Water Justice with the Forum for Leadership on Water.  The report reveals a two tiered system of drinking water management where urban centres benefit from better standards, technology and personnel while rural and First Nations communities remain at risk due to inadequate infrastructure, patchwork provincial laws, and a lack of binding drinking water standards from the federal government.

The state of water quality on First Nations’ reserves is an absolute scandal, as summed up by this editorial cartoon.

Despite all of the problems in Canada – or perhaps because of it – Canada has taken a position against legal recognition of the human right to water. In March 2008, Canada played a pivotal role in the defeat of a UN Human Rights Council resolution that would have recognized access to water as a human right, and would have established an international body with a mandate to monitor States’ compliance with this right.

International commentators, including the then UN High Commissioner for Human Rights, Louise Arbour, noted that Canada’s vigorous efforts to avert international recognition for the human right to water were uncharacteristic of its traditional role as a ‘peacemaker’ and ‘consensus-builder’ in international affairs.

As of July of last year, the Right to Water is now international law.  Canada, no longer able to block recognition of the right, abstained from the vote in the UN’s General Assembly.

Now that the Right to Water has been legally recognized, it’s worth considering what it means.   The measure of a country’s compliance with the Right to Water will be in relation to the most vulnerable and whether they have universal access to clean drinking water.  Often, these people are the most difficult to reach, but this cannot be a justification for neglecting them. On the contrary, establishing water access as a human right is specifically for the purpose of ensuring that the hard work gets done and everyone is protected.

As of right now though, both Canada and the United States still have a lot of work to do to ensure the Right to Water.

Water not for sale, especially today

Haiti Report: "No Water, No Food. People in Canada Would Have Rioted By Now..."