Weaning our politicians off the bottle 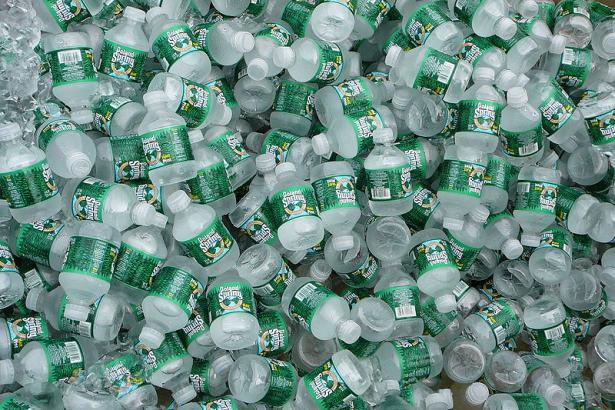 Bottled water in a photograph from Wikipedia creative commons

Oh, the French. The country that gave the world Perrier and kick-started the bottled water craze is now building free public water fountains that dispense sparkling water. The move is being taken in an attempt to tamp down demand for bottled water.

Official action hasn’t been required in North America. Bottled water sales declined in 2008 and 2009 (2010 figures are not yet fully in.) That may be a simple reflection of the economic downturn, or evidence of an environmental backlash against the plastic bottles, or concerns about inadequate regulations, or a lack of transparency by bottled water companies, or the safety of the product itself.

It’s not just sales that are hurting. The reputations of bottled water companies have taken a beating as well. The glamour brand Fiji rode high for many years before garnering some poor PR for its disputes with the republic's unelected military government. Fiji was not taking issue with the government’s anti-democracy activities but instead with a proposal that would have raised taxes on the water it extracts. Then it got hit with a false advertising lawsuit alleging bogus environmental claims.

Bottled water’s reputation is getting so bad that it’s become a convenient whipping boy for ambitious politicians. Local governments seem to be tripping over themselves to ban governmental purchases and sales of the stuff. New Westminster is in a nasty school board battle over removing bottled water from vending machines. The situation has escalated to a point where lawyers are fighting in the press. Vancouver has already banned its use in City meetings and events and promised to phase out its sale over the next few years.

In the US, there’s a highly active online campaign to force the US Congress to stop spending nearly $1 million a year on bottled water. The Polaris Institute reported that since 2006, the Canadian government spent over $7 million on bottled water.

As citizens, what should we think when our governments choose bottled water over public water supplies, particularly those departments with responsibility for providing that water in the first place?

I have to confess I’m a bit uncomfortable with banning bottled water sales outright and with removing bottled water from schools while leaving sugary sodas in place. And given the hundreds of boil water alerts in BC at any one time, including recent troubles on the Gulf Islands, it’s understandable that some may not trust the tap. But in places like Vancouver and Victoria which have world class source water protection and quality systems, the spending of public money on bottled water - outside of emergency supplies - is an outrage.

In the comment section below, please tell us how you feel about your government spending tax money on bottled water.

When it comes to bottled water, governments should:

- Buy and sell as much bottled water as they want;

- Not spend tax money on bottled water but let citizens make their own choices;

- Neither buy, sell nor allow the selling of bottled water in public facilities; or