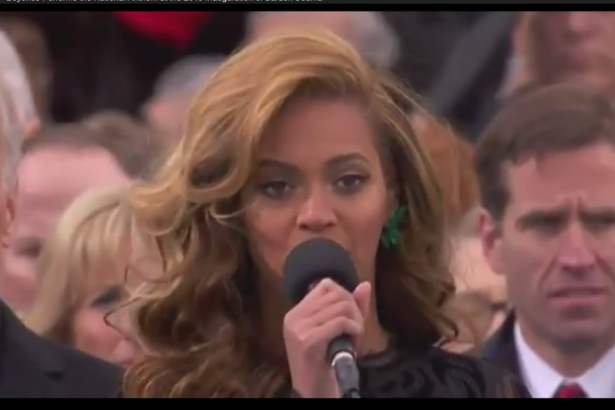 Holy Beyoncé. Take a deep breath, or take a minute to let out the most unattractive private scream (with snot and tears fighting for the largest piece of your face). This is for the one per cent who hasn't heard. This is worth it (apparently). Rumour has it that the award-winning artist might have lip-synched the United States' national anthem at President Obama's inauguration ceremony. Specifically,  spokeswoman for the United States Marine Band (who accompanied the star during the performance) stated on Tuesday that Beyoncé "did not actually sing" live.

Is it possible that the dude on the right knew something we didn't?

Master Sgt. Kristin duBois told the Times that the singer and the band were told at the last minute by the ceremony's organizers to use recorded version of the national anthem that was taped at the Marine Barracks Annex the previous night. DuBois did not say who why the order was issued. — USA Today

So, when the whole world questioned her inaugural singing performance, (Aretha Franklin laughed when she found out Beyonce may have pre-record her inauguration performance, blaming it on the weather, reports HuffPost Celebrity), whether it was live or pre-recorded, I, motionless, felt nothing. Do people real sing anymore? Why use your boring natural voice when you can make it go magical (robot/Grimes/Lil Wayne) voice places. Of course, she didn't do that, using it instead to sound exactly as she would if she was singing live. Or, better?! (I don't know).

But then I was like: Beyoncé did WHAT? And then I heard a crash and at that point I could see my heart explode out of my chest and fall to the floor, rolling down several flights of stairs (I was on the 15th floor when I found out). I can't see your halo.

So, the the moment when everyone saw Beyoncé opening her mouth in a synchronized manner to the beautiful, angelic meolody, her voice, in that moment, can best be described as "The Best Thing She never Had".

I know. It's tough. Don't be ashamed. We've all been through star-spangled heartbreak. You are not alone. Help is out there. For example, Gawker was kind enough to create a guide to help you get over the betrayal in "Beyoncé Lip-Synched: Coping with the 7 Stages of Star-Spangled Grief".

Not just for foodies: must-go events this weekend in Vancouver