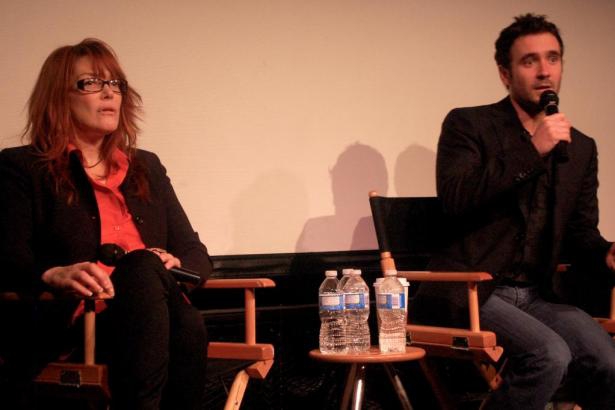 "What a hottie," Lynda Boyd remarked, as her "Republic of Doyle" co-star Allan Hawco sat down next to her.

Canadian actor Hawco (Jake Doyle), creator, producer and writer of the show, recalled his theatre-training days: "I had a small class with a guy who I hated," he said.

The National Theatre School of Canada graduate remembered doing a play at the age of 24 or 25, "somewhere," and each night, the entire audience slumbered through the entire thing.

"It was a packed house, but everybody was asleep, so I was trying to figure out why everybody was coming to the theatre," Hawco said. "The show was good."

The Newfoundland-native said that while he loves theatre, he didn't want to be taking up roles that were being offered to him. Instead, he wanted to audition and "fight" for his roles. "If I was going to fight, I wanted to fight for things that I could create myself," he said.

And then, though colour-blind, Hawco saw his acting future crystal clear:

In the hopes of avoiding that kind of tomorrow, Hawco decided to take control and started the Company Theatre, which is based in Toronto. "Basically, it started there," he said. "You gotta either do it or don't do it. When you're in this business, there's no half doing it."

It was during theatre school that Hawco had an idea for his current TV show. "My plan was that if I got enough work in Hollywood, I could come back to Canada and make this TV show," he said.