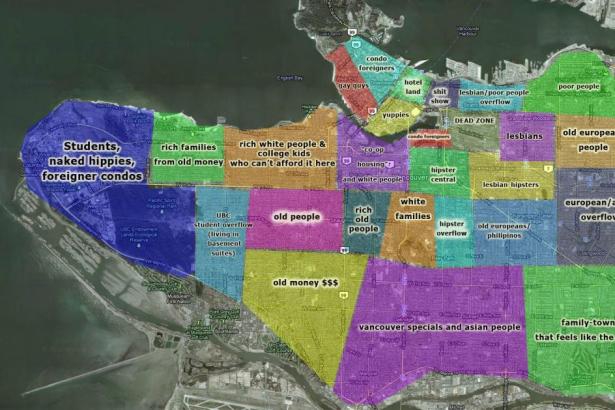 A lot of people think of Vancouver neighbourhoods in a stereotypical way, but many are too polite to express these thoughts out loud. Well, this new map that surfaced on Twitter gives voice to some of those assumptions, breaking the city up into different regions based on race, sexuality and socio-economics.

From west to east, small areas are designated to groups like "naked hippies", "old Europeans", "condo foreigners" and "gay guys". While some blocks appear to contain a more saturated population of say, hipsters, other sections are left for "overflow".

Other local outlets like Vancity Buzz and the Georgia Straight have commented on the map's somewhat shocking accuracy. And if you're a resident with a fairly solid knowledge of the city, you may find that you agree.

It appears that I live at the crossroads of "lesbians" and "poor people" -- which, given the fact that my roommate's parents once thought we were dating, may not be all that surprising.

So what do you think? Is this map accurate? Does it really represent where you live?