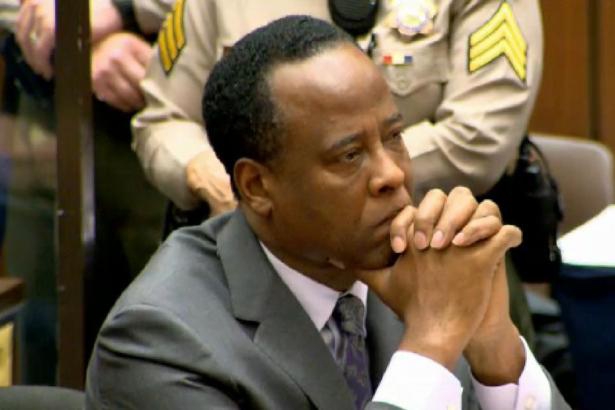 Four years in the slammer for Michael Jackson's doc, judge ruled. It was a bittersweet day at the Los Angeles court, as Jackson's family quietly awaited the court's decision. The 58-year-old Conrad Murray sat "expressionless throughout the proceeding," ABC News reports.

The judge Michael Pastor said that Murray treated Jackson like a "medical experiment," and, "unquestionably, violated the trust and confidence of his patient." He was given maximum sentence for involuntary manslaughter, like Jackson's family wanted. He was also sentenced $100 million ("the singer's projected earnings from the 50-show 'This Is It' tour payable to the Jackson estate") and was also asked to pay $1.8 million "in costs associated with Jackson's memorial service and funeral."

Jackson's parents Katherine and Joe and siblings Jermaine, LaToya and Randy were all present, but didn't speak. Attorney and family friend Brian Panish spoke on behalf of the family.

Jackson's family statement asked the judge to "impose a sentence that reminds physicians they cannot sell their services to the highest bidder."

The defense lawyer pleaded with Pastor saying to "consider the cardiologist's humble beginnings and good deeds, stressing that this was an unfortunate, tragic chapter in the doctor's life." He went on blame Jackson, as he was a drug seeker. He was "a powerful, famous and wealthy individual."

In the family's statement, the kids told the court that they did not seek revenge, even though the man took away their "father, best friend, and playmate."

Murray's sentence could be cut at least in half, according to media, due to jail overcrowding.

All the while, Murray kept his pokerface, only to turn once to mouth, "I love you" to his girlfriend after the sentence was passed along.