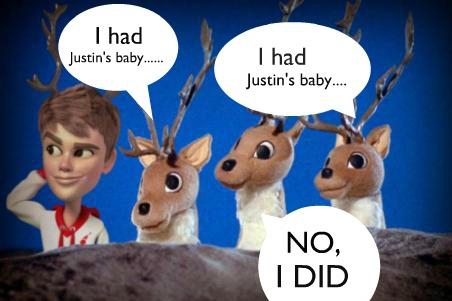 In a New Jersey clinic, Justin Bieber gets his cheek swabbed. Bieber's DNA samples were collected Friday night. A source told TMZ that the procedure was handled under "very controlled circumstances."

According to Us Weekly, Bieber wasn’t required to take the paternity test, but his manager Scooter Braun told Extra that Bieber was “ready to take a paternity test at any moment," the National Post reports.

"We've never even seen the lawsuit, but we’re going to just get ahead of this thing and go right after it. I think it’s important to hold people accountable for their actions," Braun said.

“Just because she did it, we don’t want it to seem like it’s okay for everyone to say, like, ‘I had Justin’s baby or [am] having his baby,'" Bieber added, referring to the 20-year-old Mariah Yeater, as he joined Braun in the Extra interview.

Now, it's Yeater's turn to deliver. The baby's DNA results that is...

"Bieber’s legal team will not entertain Yeater’s proposal of an out-of-court settlement, and as a rep for the pop star previously told People, they intend to take action against Yeater for making her claims," the Post read.

Justin Bieber landed in New York City for the Late Show with David Letterman today. He is to appear on The View and the Today Show tomorrow morning.