Tucker Carlson and Greta Van Susteren battle it out on Fox

The Fox News Channel's Tucker Carlson and Greta Van Susteren battled it out on Fox News Monday night over Carlson's decision to publish Mike Tyson's crude comments on Sarah Palin on his website, "The Daily Caller" over the weekend. The story in question? "Mike Tyson: Sarah Palin met ‘the wombshifter.'" 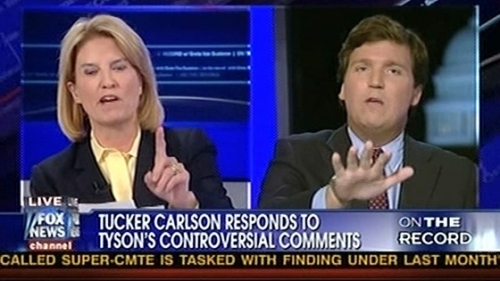 Van Susteren later took to her own site to lash out: "It is not just smut…this is violence against women," she said on her blog. She called him a "pig" and  the “purveyor of smut" and referred to Tyson as a thug.

The story features quotes about Sarah Palin's alleged one-night stand with former NBAer Glen Rice in the late 80s. The comments were based on Joe McGinniss’ book, “The Rogue."

"I really don’t understand my friend Tucker Carlson," Van Susteren said on her blog. "He owns the website The Daily Caller and it currently has on its front page the most vile story — referring to a sex act with Governor Sarah Palin as a “womb shifter.”  It is even the headline.  Do you know what that means?  Figure it out. It is really vile."

She went even more coocoo over the fact that the right-wing commentator would not take it off his site. Even then. The story remained on the Caller, and it still does, though this time, a warning from the editor himself:

"Many of the quotes in this story are offensive, indeed repulsive, and not suitable for younger readers or those who are easily shocked." (Hint, hint Van Susteren).

"They are also newsworthy. Had Tyson used this language to attack virtually any other person in public life, he’d be vilified on the front page of the New York Times. But you won’t read these quotes in the Times. We believe they deserve public scrutiny and condemnation."

And now there's a new story there too: "The DC Morning: Carlson explains to Van Susteren how quotation marks work," which featured more defending and reasoning behind the latter story.

"If Mike Tyson is irrelevant and nobody cares what he has to say about anything, as some Palin supporters are insisting, why did Greta Van Susteren have him on her show?" questioned the writer, Jim treacher.

"Why was she friendlier to the demented rapist than to someone she calls a friend who reported that rapist’s ugly, hateful words?"