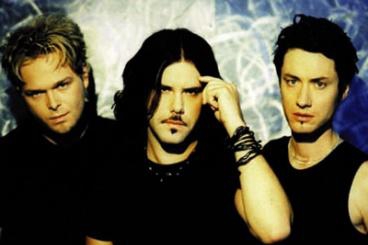 Remember The Tea Party? The Canadian rock band, which rose to fame during the mid-90s, is mulling over selling its website domain to the  right-wing U.S. political movement of the same name.

Band member Stuart Chatwood claimed that "so much damage" was done by the Tea Party political movement that the band is now thinking of giving up their web name. Currently, a google search for "The Tea Party" turns up the band's website with a disclaimer saying "No Politics...Just Rock and Roll" to ward off any raging anti-Obama political activists.

The notion was stirred up when a article in Business Week claimed that the band's website is so popular that it could probably turn a nice profit if they put it up for sale. GoDaddy.com president Warren Adelman estimated that Teaparty.com could sell for well over $1 million.

It's a lot of money for a band that hasn't made much of a splash since its band reunion in April.

Would it be shameful if the progressive Canadian rockers -- who claim to oppose the Tea Party's politics -- tried to cash in on their name during a tough time in their career? Apparently, the band has families to feed, and have recently decided to give up their lucrative domain. The sale would be a boost for Tea Party activists, who are presently found under the decidedly less catchy domain name teapartypatriots.ning.com/

Read more about the story here.