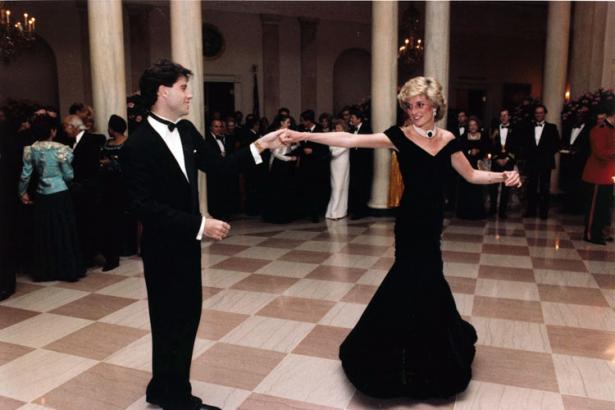 The late Princess Diana's dresses were sold for millions at Waddington's auction house in Toronto Thursday night. Diana's Edwardian-inspired Victor Edelstein evening gown was auctioned for a modest $800,000. The iconic dress became memorable after Diana danced with John Travolta at the Whitehouse in 1985. Recent global attention to the royal newlyweds, William and Kate, has renewed interest in Diana's charitable work.

TORONTO -- The famed dress worn by Diana, Princess of Wales while dancing with John Travolta brought in the top bid at a Toronto auction Thursday night that featured some of the late style icon's well-known designer gowns.

The midnight-blue silk velvet dress designed by Victor Edelstein sold for $800,000. Diana wore the Edwardian-inspired gown with off-the-shoulder straps while taking a memorable spin on the dance floor with Travolta during a 1985 White House state dinner.

Prior to the sale, auction house Waddington's had listed the estimated selling price of the dress between $800,000 and $1 million.

Stephen Ranger, vice-president of business development for Waddington's, said it will take a few days to compile a final tally of all 14 dresses sold from the collection. But Ranger said they were pleased with the overall results, adding that they fell in line with expectations, including for the so-called "Travolta'' dress.

"I think that that dress still represented $800,000 and an exponential return on its original purchase price, and I think 10 years from now people will be looking on that price as a bargain,'' he said in an interview following the auction.

Other auction highlights included two other Walker-designed creations. The sleek dresses were worn by Diana in images captured by photographer Mario Testino for a Vanity Fair feature published a month prior to her death. A cream silk crepe dinner dress sold $250,000 while a black halter-neck dress with beading sold for $210,000.

American entrepreneur Maureen Rorech Dunkel originally purchased 12 of the gowns anonymously at a Christie's auction in New York eight weeks before Diana was killed in a car accident in Paris in 1997 at age 36. Two additional dresses were later donated to the collection.

The Tampa Bay, Fla., resident said in an interview last month that she paid US$870,000 for some of the late princess's most well-known evening gowns, several of which were worn for state visits and dinners.

At the time, Dunkel said her preference to have the collection sold to a single individual, institution or foundation. It was not to be.

Ranger said the dresses were purchased by different buyers, but that they weren't yet prepared to disclose further details on their identities.

While an official estimate for the collection of 14 evening dresses wasn't immediately available, the announced bidding sale prices for each dress ranged from $110,000 up to $800,000 for the "Travolta'' dress.

An unofficial tally of dresses based on the sale bids appeared to be in the neighbourhood of around $3.17 million.

The 14 dresses were among 79 gowns hand-picked and auctioned for charity by Diana, who at the time had expressed a desire to see the garments used to help others who were less fortunate.

Diana had lent her voice and presence in championing numerous humanitarian and charitable causes during her life, including individuals living with HIV-AIDS, afflicted by leprosy and affected by landmines. The auction netted $5 million in proceeds to benefit select charities.

Prior to the auction, the dresses were featured in "The Life of a Royal Icon'' exhibit at the Design Exchange in Toronto. The exhibit followed an international tour which included a previous stop in Toronto, as well as visits to Vancouver, New Zealand, several U.S. cities, and a decade-long stay at Kensington Palace in London, where Diana lived until her death on Aug. 31, 1997.

Dunkel, founder of The People's Princess Charitable Foundation, Inc., said she felt a responsibility to do something meaningful with the collection, which is how the concept of the charity tour originated, raising more than US$1 million in its first four years.

But Dunkel said in a recent interview that after 14 years she was ready to move on to pursue other goals and interests.

"I felt that with the wedding of (Prince) William and Catherine and the royal fever that is pretty much around the globe it was just a really good time,'' she said last month.

Waddington's is donating a portion of its commission from the sale to Canada's National Ballet School as a tribute to the princess's passion for both children and ballet. Diana was a supporter and patron of the English National Ballet and the City Ballet of London.