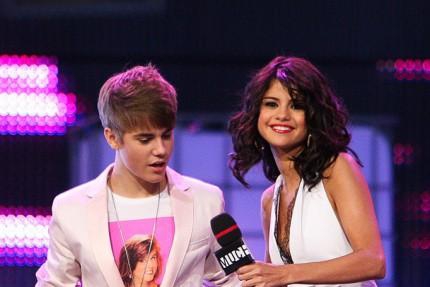 Lady Gaga bookended the MuchMusic video awards with her trademark eccentricity and electric performances. It was the 17-year-old crooner from Stratford, Ontario, however, that elicited a frenzy among audience members.

And, without failing his fans, Bieber stole the night simply by showing up. The teen titan -- who wasn't slotted to present or attend -- drove fans wild with his surprise entrance on the red carpet.

"When he got there, I felt the ground move," said CTV reporter Lainey Lui.

Gomez and Bieber didn't shy from flirting with gossip about their relationship on-stage.

"You guys may not know this, but I love everything about Canada," Gomez joked in her opening monologue.

"Hockey, I play. Back bacon? I just ate some backstage. And it's just fun to say 'Saskatchewan.'

Moments later, she presented Justin Bieber and Drake with the best international artist of the year award.

The winners awkwardly shuffled positions so that Bieber could stand next to his girlfriend.

"Selena? Nice to meet you, I'm Justin," he said with a wink.

"You're very beautiful. Maybe we could go out sometime?"

After the show, Bieber capped off the night with these words of wisdom: "Dont forget where you come from...and always show love to home. I LOVE CANADA!!! THANK YOU. GREAT NIGHT."