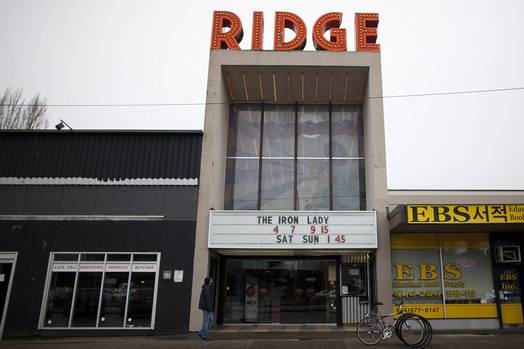 It's another sad day for movie buffs: one of Vancouver's most storied independent movie theatres, The Ridge, will be closing its doors on February 3, Festival Cinemas announced today in a press release. Since opening its doors in 1950, the Ridge has been exposing audiences to unique films, ranging from Hollywood blockbusters to foreign film classics.

“ This announcement is personally very bittersweet for me to make," Festival Cinemas president Leonard Schein said.

“We hoped that operating it in conjunction with the Fifth Avenue Cinemas and Park Theatre would help preserve its operation, but we were wrong, and now with the impending demolition of the site by the property owner, many people think it has already closed....I am sad that the Ridge is going, but happy for the many great memories it has brought to me and our fantastic and loyal audiences throughout the years. I am also glad that Ridge's landmark signage will be preserved in the new structure by Cressey Development Group.”

In a gesture of appreciation to the Ridge's fans and followers, Festival Cinemas is showing a series of films for the final ten days of its operations. Starting January 25 there will be an amazing selection of movies offered for only $5 (full list of films below).

As well there will be a benefit showing for the educational trust fund for the children of Ian Caddel (long time film writer for the Georgia Straight) of My American Cousin with director, Sandy Wilson and star Margaret Langrick in attendance for a Q & A, a repeat of Sing a Long Sound of Music with “fun packs” (dust off your lederhosen one last time) and the movie that started it all, The Rocky Horror Picture Show. See the Festival Cinemas website for details.

ALL FILMS $5:00  except: MY AMERICAN COUSIN (benefit for Ian Caddell’s children’s education fund), with director and star in person for Q & A and SING-A-LONG SOUND OF MUSIC (with “fun packs”) which will be $10. and the midnight ROCKY HORROR PICTURE SHOW which will be at Festival Cinemas regular prices (THE ROCKY HORROR PICTURE SHOW on Saturday, February 2 at 9:20 will be $5.00)  See www.festivalcinemas.ca for a detailed synopsis of these films: