If you didn’t read the press release like your VO correspondent, you would have been wandering around in a bit of a befuddled state at Bob Rennie’s Wing Sang building on Saturday night.

“Hey, Bob, where’s the art? Did the guy not show up?” might have been your Philistine reaction to what appeared to be a conspicuously empty gallery—and the Wing Sang is one big space.

Turns out that Vancouver’s favourite art collector and condominium marketer was using his exquisitely-remodelled Chinatown building to show the diminutive work of Scottish artist Andrew Grassie.

The press release explains it best: "For this exhibition Grassie will be unveiling new works created from two special projects commissioned by Rennie Collection. Following the museum's programming from its 2009 inception, Grassie conducted `field recordings', creating paintings from its previous five exhibition installs. His photographic source material from the life of the Collection resulted in depictions of the collectors' home, where contemporary artworks dwell alongside domestic traces."

"He has also created paintings of the Collections' warehouse, wherein artworks are glimpsed; a large statue made by revered Los Angeles artist Mike Kelley peers from within the sterile interior of the storage facility, evoking a sense of curiosity as well as terminus."

"With these pictures, Grassie completes a picture within a picture, a recursive portrait of the collection. The museum will exhibit works of the museum itself, albeit when it was most conspicuously 'not exhibiting'. Grassie's conceptual inversions are also thematic, clever yet staid, and his own installation at Wing Sang promises to be both sparse and intricate. Though his visual punning is dextrous, it is ultimately the confident stillness of Grassies' images that activates them."

Got it? A “picture within a picture,” and “museum exhibit works of the museum itself,” “conceptual inversions,” and “visual punning.”

Arriving not fashionably late but only just plain late -- 20 minutes or so before the exhibit closed -- I noticed that there were far more people mingling and mugging on the fabulous rooftop terrace than there were down in the two floors of the exhibition. It was a marvelous night for a moondance, alright.

At a casual glance, Grassie’s sparsely framed photos are unremarkable snapshots of gallery installs in various stages of set-up. Hopelessly ignorant about these matters, I had to ask one of the red-shoed docents to explain what was happening. Again, from the press release:

A closer inspection reveals Grassies' works to be carefully constructed paintings made using egg tempera-based pigments, an antiquated medium known for its permanence - a remarkable juxtaposition to the fragility and disposability of photography.

And it was extremely detailed and intricate -- I can’t imagine the steady hand required to create such hyper-realistic depictions. But unlike other Rennie openings I’ve attended, I only saw two people peering at the miniatures. Perhaps it was all one big joke; though I hesitate to criticize.

I don’t know – maybe the absence of people in the gallery itself was a metaphor for the lack of action in Vancouver’s real estate market in the past month. And the crowd up on the rooftop is perhaps symbolic of a populace fiddling while condo prices crash and burn. Perhaps that’s why the lights above Rennie Marketing Systems’ terrace spell out: “EVERYTHING IS GOING TO BE ALRIGHT”.

People who come to Wing Sang for the first time always take their cell phones out to photograph that. 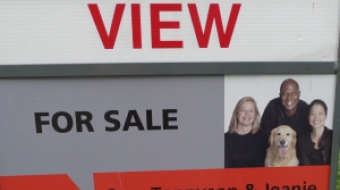