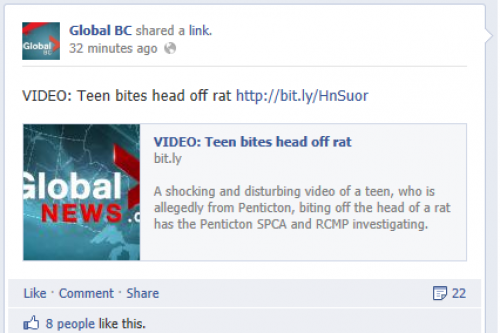 The only thing worse than a teen biting off a rat’s head and posting a video of the act on YouTube is a national news organization linking to it, giving him media attention and a chance to make money off his act.

Global BC was the first to break this story on Friday about the video of the teen (who goes by TheMalow10 on YouTube) from Penticton. Some of the comments on Global BC's Facebook page criticized Global for posting the story, asking why the video was being posted in the article.

While that alone may be a little morbid, here's where it gets downright creepy: a little-known fact about YouTube is that whenever a video reaches a certain number of hits, that video’s creator gets a chance to monetize his account. So by Global having the video on their website, it gives a chance for the disturbed teen to make a few cents every time a interested reader (or fellow psychopath) clicks on the link.

Global BC has since taken the video off of their respective websites. Global BC news director Ian Haysom said that Global TV decided not to run with the story, although their sister station in Kelowna did pick it up. Haysom also clarified that Global TV does not support or endorse TheMalow10 or his video.

At the time of this writing, the video only had a few hundred views, so he wasn't likely to be making any money off of his shocking deed yet. But had the Global link generated more views, it would have increased the possibility that he be invited to monetize his account.  If you don’t believe me, just Google YouTube monetization and invite and adSense.

It’s important to realize that not only is Global and YouTube feeding this kid monetarily, but also feeding his ego; this was clearly the main reason he posted this video. It is shocking that any large media organization would give any attention at all to a person like this.