Homeless for the holidays in downtown Vancouver: photos 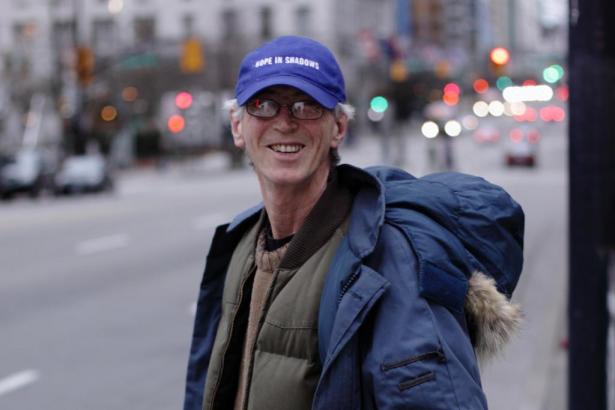 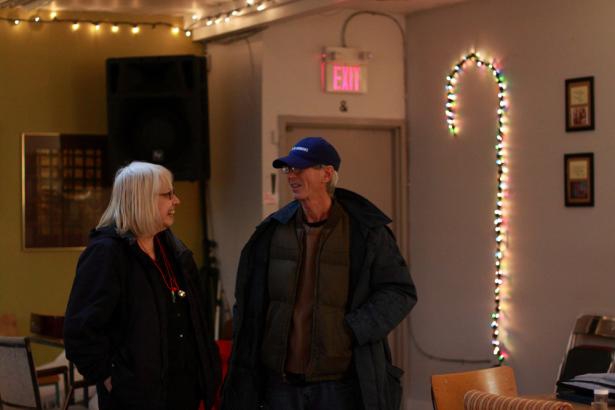 Photos and text by Ewa Chruscicka.

I met Ron McGrath at the A&W by Georgia Street in downtown Vancouver. It was still dark  when we sat down to have breakfast.  I couldn't tell right away that he was homeless. His many layers of clothing, small suitcase on wheels and umbrella made him look like a traveler who had just arrived from the airport and was on the way to his hotel.

I wondered about the kinds of people I would run into so early Christmas morning.  The streets were empty, except for a few people sleeping, huddled in doorways or in sleeping bags on the sidewalk downtown.

As I waited for Ron outside the fast food restaurant, I was approached by a few street people begging for change. They didn't take no for an answer.

“Please. Today's Christmas,” they pleaded. I showed a man my empty wallet. I couldn't help feeling bad, even though I could hear him cursing me under his breath as he walked east into the Downtown Eastside. 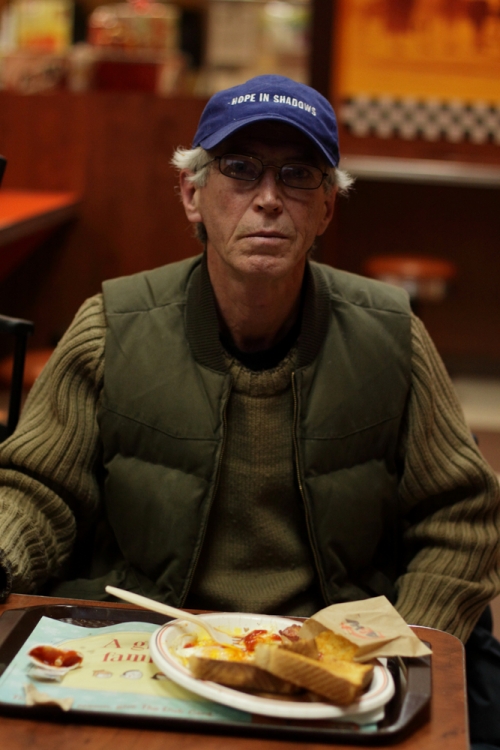 I had contacted Ron through  Megaphone, a magazine sold by homeless and low-income people. He's one of the vendors who sell the magazine around the city. A couple of days before Christmas, I stopped by the corner he was working on and asked whether I could interview him on Christmas. He said it would be fine and so we made plans to meet at 8 a.m.

Ron said he grew up in Newfoundland but has been living in Vancouver for the past thirty years. He spent 20 years of his life working for the railroad, but was quickly fired after one day he walked off the job.

What caused him to do so, he said, was a state of immense confusion that later developed into what he called an “environmental illness”. Soon after the incident, Ron became extremely sensitive to artificial chemicals and toxic materials. He became homeless once he moved out of B.C. Housing residence. He said he was unable to deal with the constant renovations and exposure to chemicals in his building.

His environmental illness makes it difficult to stay indoors, or even be around other people. Therefore, it's been difficult for him to find another job. He's been homeless for the past three years, and is currently staying at a shelter. He's uncertain of his future because unless he enrolls in one of the social programs offered by the shelter, he will be forced to leave within 30 days.

Ron is not a drug addict, or an alcoholic. He believes his issues to be of a physical, not mental nature. He said the social programs offered at his shelter don't take into account individual needs and so far he's had no luck finding support for his illness.

Our conversation was interrupted when one of the employees started to clean tables using Windex.

We went outside, and continued talking on the street. Ron spoke about the spread of disease within homeless shelters, as well as the lack of support for people like him who have trouble being around other people. He believes that one of the solutions to the homelessness problem might be metal container homes. They provide privacy, prevent the spread of disease and don't grow toxic mold, which he said has been a problem in conventional shelters.

We then headed over to Columbia and 4th  to a small Christmas lunch offered by the Mosaic Church. What I expected to be a traditional church turned out to look more like a loft, filled with couches, and drums and guitars at the back. There were 10 people inside -- everyone knew one another. The Church's pastor, Don, explained that they try keep to their meetings small and intimate. Usually, people find out about Mosaic through word of mouth, and we are among the handful of people who made it here for that quiet Christmas gathering.

After a short prayer, everyone had their meal, walking around and keeping the conversation going.

Ron comes here to keep warm and to watch TV during the day, he said. It's his solace away from the busy streets and crowded shelter. Christmas at the Mosaic is a break from the brutal reality he has to face outside. He described his current life as  a constant push for survival.

It was a sad walk back to the shelter.