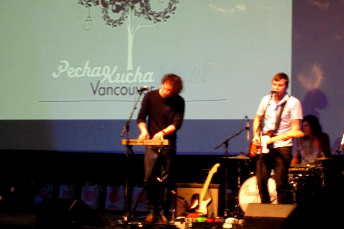 Pecha what? Up until a week ago, I had never even heard of Pecha Kucha, let alone was I able to pronounce its name. But as host and producer Steven Cox joked in his opening speech on Thursday night, it seems as if no one else really knows either. For the record, it is pronounced ‘peh-chak-cha’, a generic Japanese term for the sound ‘chit chat’.

Despite its difficult title, the idea is simple: Twelve speakers talk for 20 seconds on 20 images of their choice. The fast-paced format ensures the presentations are kept concise and interesting.

And an interesting night it was. Held at the Vogue Theatre, the 14th volume of Pecha Kucha Vancouver was a sold-out show as expected. After a solid performance from local indie-rock band The Raccoons, Cox took the stage to introduce the event and its history. Pecha Kucha first began in Tokyo back in 2003 as a way for young designers to network and showcase their work in the public domain. What began seven years ago has now evolved into a worldwide affair. Pecha Kucha nights are currently being held in over 370 cities across the globe.

First up to speak was novelist and journalist Timothy Taylor, best known for his bestseller “Stanley Park”. He spoke of his interest in Vancouver street art, and the symbolism of putting familiar objects in unfamiliar areas. One of his memorable images was of a Gastown alley garbage bin that had been painted as a Louis Vuitton suitcase. It was a fascinating look at how “confrontational and chaotic art forms” can provide powerful commentary on local political and social issues.

Next was Phoebe Glasfurd, a designer who has done the packaging, signage and menu designs for a number of local businesses. She gave a quick recount of her artistic journey that had been largely inspired by Japanese culture.  Her images were arguably the most visually appealing of the evening, which speaks to her belief in the Japanese saying that “Not only does it need to function properly, but it needs to look beautiful too”.

The next few presenters challenged the audience with their thought-provoking ideas and opinions. Matthew Soules, a well-spoken urban architect, posed the question: What type of city do we want to live in? Similarly, writer Kelly Diels spoke about the meaning of the word “cleavage,” a sexy word that she believes “means more than you might think.” Jonathon Igharas and Alexander Suvajac, co-founders of Makeuse Studio, and Sapna Dayal, the executive director of Imagine 1 day, discussed how their time abroad has impacted their lives and inspired their work.

Shifting focus, the next presenter was Mark Brand, owner of Boneta restaurant in Gastown. Brand focused on his relationships with the neighbouring individuals living on the streets of Gastown. His presentation was relaxed and humorous, but his final message was powerful: “We can all do something and I hope we do.”

Speaker Mike Weinmaster did the impossible by making the topic of plants a little more exciting. As a botanical artiste at Green over Grey, he uses hundreds of species of plants to create beautiful green spaces in what he deems “a boring grey concrete city.” The crowd loved the images of his work and his idea of covering the downtown Sears building entirely in plants in order to bring nature back to the city.

Nearing the end of the night were Steve Rosenberg, writer/directory of Pull Focus Film School and Charles Campbell, a freelance journalist with a disgruntled view of the current state of our local newspapers. He provided  insightful commentary on the shift away from traditional media, and how newspapers have yet to innovate and evolve in an effort to keep up.

While the night was full of interesting and, at times, random thoughts, the last two presenters were by far the most entertaining. Kim Anami, a life, sex and relationship coach, did not hold back. She gave the audience a number of amusing tips for heightening their sexual and spiritual lives that left everyone either shocked or smiling. And while host Cox joked afterwards that there should be “no more sex talk”, the last presenter was none other than Danny Filippone, the owner of the Penthouse Night Club. The anecdotes of his childhood and family life were riveting as he recounted meeting countless celebrities and having a roulette wheel in his bedroom.

As I left the theatre, I began to understand why Pecha Kucha is so successful. The presentations may be odd and random at times, but the inspirational, educational and artistic stories about one’s own city make this “chit chat” worth listening to.

For more information on Pecha Kucha Vancouver and its speakers, visit their website.