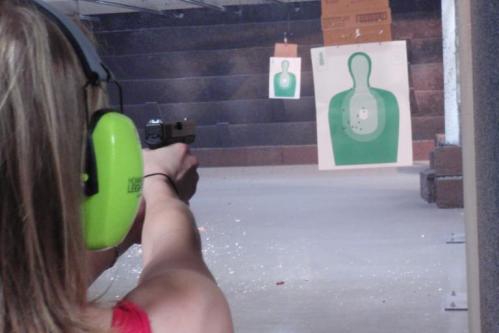 Vancouver’s fun-loving lifestyle isn’t just limited to zenning out yoga-style or sweating your stuff jogging along the beach. For ladies seeking a little more oomph from their local adventures here are ten action-packed, adrenaline-fuelled activities to satisfy even the most hardcore thrill-seekers out there.

1. Learn to ride a motorbike

Getting out on two wheels doesn’t necessarily have to mean pedal power. Even if you’ve never been on a motorbike before there are some great courses out there that guarantee to take you from zero to motorbike hero in less than one week. That hold-your-breath, ‘here we go’ surging feeling that rises in your stomach as you open up the throttle is as addictive as anything I know. For those looking to learn I can’t recommend highly enough the amazing team at ProRide for their patience, skills, knowhow, experience and success rate. Even with total novices like me!

2. Mountain biking in the North Shore

Nothing against a leisurely cycle around the sea wall but occasionally you need to sink your teeth in to something that’ll really get the blood pumping. When it comes to biking you won’t find bigger or better than the North Shore. This area has a reputation for the best and most challenging mountain biking in the world, and a style of biking unto its own. Local playgrounds include Cypress Mountain, Mt Fromme and Mt Seymour, although you can head as far afield as Whistler if you wish. And just like much of Vancouver’s elusive wildlife, you may not always see the bikers as you drive by in your four wheels but as you head over the Lion’s Gate Bridge you can be sure that you’re truly in their territory. So why not join them?

If you’re done with dry land, try taking to the foamy waters around Vancouver for a ‘right out there with nature’, high energy kind of adventure. There are a variety of rafting experiences out there to choose from for all ages and experience levels but you can’t go wrong with a trip on the rivers around Whistler.

Donning a pair of gloves and stepping into the ring isn’t for everyone and nor is it an injury-free sport, I'd know - two x-rays this year and counting! However the buzz of adrenaline, thrill, excitement and raw, hardcore action is well-worth the trade-off. There are countless types of martial arts and even more martial arts centres but my personal recommendation is Universal with two locations: Richmond and downtown Vancouver.

5. Shoot your socks off

An industrial estate might not be the typical location for a shooting range but don’t let this put you off. DVC Ventures in PoCo is the only indoor shooting range in the area that allows even those without a gun licence to discharge anything from 9mm handguns to rifles and revolvers. Check out Ladies’ Night on Fridays for discount gun action and gather your best pals together for night of rootin’, tootin’, shootin’ fun.

It’s no wonder Vancouver has a reputation for being the ultimate, accessible playground. Where else can you be packing up your desk at 4:30pm and weaving your way down a mountain just one hour later? Whether it’s skiing, snowboarding, tubing or just all-round snow-bound adventure there’s so much choice that electing your snowy exploit is the hardest part. There’s no doubting Whistler’s world-class status but there’s a lot to be said for the local mountains too and without the Olympics squeezing out valuable mountain space in winter 2010, this season will be all about the locals. If this is your year to learn, a couple of lessons are all you’ll need to get going.

Named as the ‘Best Surf Town in North America’ in Outside Magazine's 2010 Editors' Choice Awards Tofino may not necessarily be in the backyard of Vancouver but it’s not too far away either. If you can brave the cool water temperatures you’re in for a treat of 22 miles of surf-worthy beaches. Waves roll in uninterrupted all the way from Japan to create some of the most dynamic surf action you’ll ever see. Novices and experts alike are welcome in Tofino but if you’re of two minds as to whether it’s a thrill you want to seek, just turn to the Beach Boys for advice: “Catch a wave and you’ll be sitting on top of the world.” How could you be left with any doubt?

If you’re done with land and sea the only choice left is the air, in which case tandem paragliding is a great place to start. The safety of someone strapped to your back will ease any nervous tension you might have and, once you’re up there, the silent grace of soaring like a bird provides the most serene, ‘at peace’ kind of feeling. All-in-all though, it’s a relatively short adventure and there’s no promising you won’t want to do it all over again just as soon as your feet hit the ground. After all, addiction is the (often expensive) side-effect of adrenaline.

Not after the serene grace of a bird? How about the stomach-churning, plummeting feeling of falling thousands of feet before being safely caught by parachute? If you thought paragliding might be addictive, welcome to skydiving. The beauty of skydiving is that up there in the sky no one can hear you scream, so you can let rip to your heart’s content. As every thrill-seeking lady knows, the scream is all just part of the rush. If you’re looking for a first-time taster, tandem is a great way to go and so too is Skydive Vancouver’s rock-your-socks skydiving location in Abbotsford.

If you’re looking for full-contact action then roller derby just might be your game. Girls battle it out on roller skates to score points by physically passing through a group of girls on the track who are trying to block them from doing just that. With team names such as ‘Faster pussycats’, ‘Riot Girls’ and ‘Bad Reputations’ how could a thrill-seeking femme resist? Unfortunately when the ice hockey sticks come out the roller derby girls are sadly forced to hibernate as the ice on the rinks takes over their much-beloved rollering space. Theirs may only a short-lived season (currently—although the Terminal City roller girls have a plan!) but it’s an action-packed few months of grunt, grind and grit. None of the action is staged and nor are the bruises of this full-contact sport but there’s a lot to be said for the satisfaction of war wounds.