Z: I think that I struggled but I was naïve to a lot of things because we grew up in Jamaica. We never understood media scrutiny. We don’t have that in Jamaica when I was growing up. It was never part of our life. So even when I started in America, I was naïve to it. I wasn’t too understanding to it but when I did get to understand it, I was like “Oh yeah, I feel the pressure.” (laughs) After the fact! Like after “Oh yeah, that was the pressure everybody was asking me about. Ok, I got it now, I got it!” I finally figured out what everyone was talking about… after the fact! But you know, as an artist and as a true artist because I’m very confident because what I’m doing is as sincere as what my father did—I’m not pretending anything, I’m not acting anything. I’m sincere with it just as he had done. I’m very comfortable with my father’s legacy now and I would never run away from it. I would never hide from it. I would never do anything to separate myself from him and his music. I’m a part of it and he’s a part of what I do also. It’s all good with me.

Obviously in the film, it also shows that kind of struggle he went through, with people getting at him, the media and all that stuff. Apart from that, what other part of the film did you relate to, emotionally, the first time you saw it? What hit you?

K: I think for me, I remember being in Miami when he was in the hospital. I remember the whole journey, but the whole Germany side, I knew nothing about. It was pretty emotional so that part was heavy. And then you know, his whole process, how he came up with songs.

Z: I think for all of us, it was the illness that was the most emotional. We were sheltered from that and didn’t know.

And so seeing that up on the screen must have been…

Z: Oh yeah, man. It was… oof… and then I thought, “I wished we could have done something if I knew… “ but we were so young.

How old were you during that period?

Since you were pretty young when all of this happened, what were some of the original perceptions you had about Bob Marley that the film change? Did it change anything?

Z: Yeah, I wouldn’t say my perception changed but it did give me a fuller understanding of our father because the people who were speaking about it were people who knew him intimately. And that’s what we wanted to do with the film because there’s been a lot of things about Bob but it’s been done by writers and authorities who never even knew Bob. These people who spoke in the film who knew Bob… like everyday I see Neville Garrick, and he tells me stories everyday! Like he’s known us ever since we were little kids and he tells us stories everyday about all this. And sometimes he repeats himself, and I have to tell him, “Hey Neville, you told me about that already.” I think we just got a fuller understand of Bob from the adults who experienced him as an adult, while we experienced him as children. It’s a different experience.

Definitely, the film makes people feel that they knew Bob Marley but it seems there’s also that sense from audiences who have seen him perform live, and I guess when people see you perform live, they feel that connection. How do you feel about your art, knowing how much it impacts people and how much it influences them?

Z: We hear that…. But we accept these things with a lot of humility because it’s not really us. It’s something else. It’s not really me. It’s like a tree giving a fruit and being very happy that it gave you the fruit but not understanding that if it didn’t rain, this food wouldn’t grow. If the sun didn’t shine on it… you understand what I mean? It’s not just about the tree and the fruit it gave but it’s about the sun that shone on it to make it grow, and the rain, and the soil and the worms underneath that oxygenate the earth. There’s a lot more things to it… and that’s how we feel about it. There’s so much more about it than what we do. There are other things involved.

So what do you want audiences to take away from the film?

K: I guess, the essence of him (Bob Marley). The real him, not just as a musical icon but him as a human being. 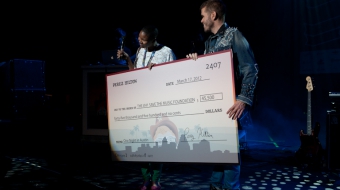