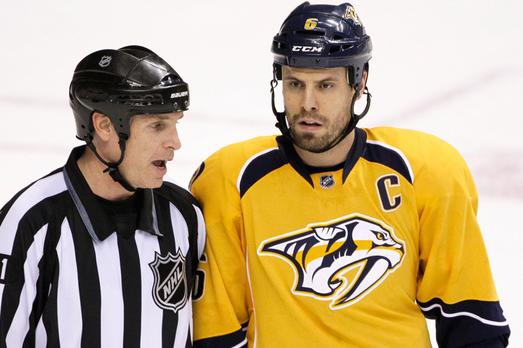 Another day, another suspension controversy for the NHL. In case you missed it, during the third period of last night’s Nashville, Detroit game, 6’4, 230-pound Nashville defenseman Shea Weber grabbed Detroit forward Henrik Zetterberg’s head and smashed it into the end boards with extreme force.

Relative to the average North American salary, the cost to Weber was 14 dollars.

If the NHL is actually serious about curbing concussions, why such a minimal response to a vicious play?

How can anyone continue to respect Brendan Shanahan and the NHL Disciplinary Committee after that decision?

The $2,500 fine issued to Shea Weber is an insult to every player that has been cheap shoted before. Marc Savard, Simon Gagne, Steve Moore, Paul Kariya and many others have had their careers cut short and ruined by abhorrent acts like Webers, yet the NHL continues to send mixed messages to its players.

What’s worse about Weber’s hit -- as opposed to, say a Matt Cooke flying elbow, or the Byron Bitz’s boarding major last night – is that Weber’s head smash had nothing to do with hockey. It wasn’t an accidental, spur of the moment poor decision. Weber paused during a puck battle, grabbed Zetterberg’s head and drilled it as hard as he could into the boards.

According to reports, after the game the NHL phoned Red Wings management to inquire about Zetterberg’s health before levying the fine.

This is hugely disturbing for four reasons:

1) What prevents teams from, in the future, lying about the status of a player to gain a favourable suspension against an opposition player?

2) What if the player’s symptoms don’t appear for a number of days? Moreover, concussions are often initially misdiagnosed. Zetterberg could miss an extended period of time, and his absence might ultimately cost the Red Wings the series. But I suppose it's awash because Shea Weber can’t afford to purchase another diamond studded hatpin.

3) The NHL is setting a very dangerous precedent. If the severity of the suspension is relative to the injury, where does it stop? Along this line of reasoning, Matt Cooke should have never been allowed to play in the NHL again. Nor should Todd Bertuzzi have.

4) It creates a culture of an eye for an eye, and, since there is an instigator rule, the eye for an eye retaliation comes in the form of cheap shots towards other star players.

The appalling message from the NHL is clear: it’s not the viciousness of the hit that matters; it’s the extent of the injury.

Here is the right message to send: If you physically attempt to injure an unwilling combatant, with excessive force – especially force to the head – you are going to sit for a very long time.

It’s hard to come up with a clear motive for the NHL’s decision. The first idea that comes to mind is that Shea Weber is arguably the best defenseman in the NHL, and the NHL hates suspending its stars. This is plausible. But the NHL also doesn't want to see its stars, like Zetterberg, get injured. It’s a wash. I guarantee, if a plugger like Shane O’Brien does that to Zetterberg he is gone for at least two games.

In fact, the NHL just handed out a two game suspension to Canucks’ fourth line forward Byron Bitz, for his dirty hit on LA’s Kyle Clifford last night. There you have it, the NHL star player double standard in action, on the same night.

But here is the explanation like more: NHL upper management are bunch of inept morons who fail at every attempt to clean up the game. They send mixed messages, give out uneven fines and weak suspensions, and are just generally gutless when it comes to making hard decisions about the long and short term health of their players.

At one point during the NHL this season there were 30 players out with concussions. 30. About 1 out of 25 players in the NHL. And that list included Claude Giroux, Niklas Backstrom, Sidney Crosby, Andy Macdonald, David Perron, Chris Pronger, Ryan Miller, Nathan Horton, Joni Pitkanen, Jonathan Toews and Simon Gagne – not exactly a bunch of fourth liners.