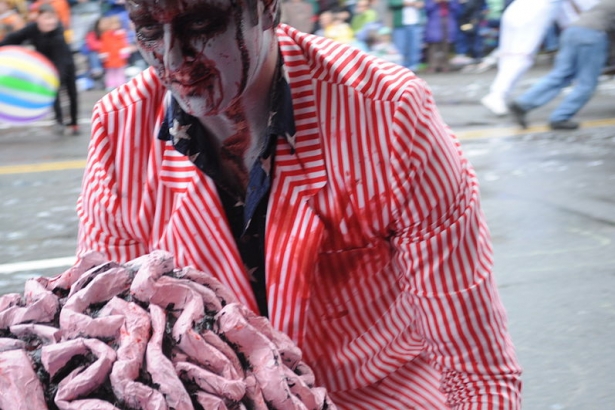 Sure, it's all dress-up and paper mache brains now, but just you wait...

By now, I think we can all agree that the apocalypse will either be aliens or zombies. They have been the clear leading candidates for many years, so let’s just agree that one or the other is coming soon to eat your face. Or enslave your young. Either way, really.

So what can we do to protect our sweet, juicy brains from the undead? Up until recently, a Hermiston, Oregon middle school was doing its part by offering an extracurricular zombie survival class. In fact, it was the most popular such class offered at the school, with over 70 students enrolled. Think about that for a second. This is a class that got fifteen-year-olds to voluntarily stay after school. But after a local paper ran a story about it, prompted by its overwhelming popularity, the local superintendant learned of the class’ existence and promptly cancelled it. The course has been replaced with explanatory reading, much less effective against brain-eaters.

Parents were concerned about the students being exposed to violence, weapons, or having fun at school. Besides, kids should really be getting their weapons training from video games. Hence the cancellation. On the face of it, this seems to put Hermiston children at serious risk, should walkers come shambling out of the dense Oregon forest hungry for underage brains (or, as they like to call it, “human veal”).

But on the other hand, I don't think that I would want to get my survival training from a public school. It’s not that I don’t trust the teachers or that this is anything but an essential life skill. I have no doubt the teachers are great. I’m just wary of taking survival advice from the same people who brought you “duck and cover.”

Fortunately, Oregon parents can enroll their children in privately run zombie survival classes, some of which cater to children as young as seven. If you’re a student of Michigan State University, you can take an online zombie survival course from their School of Social Work. Not sure how surviving the post-human zombie wasteland relates to social work. But hey, if you’re talented enough to pull off conflict resolution on that level then colour me impressed.

As it turns out, survival courses are easy to find, simply by visiting sites like www.zombiesurvivalcourse.com, a website which also features a photo of four people who scare me a bit more than actual zombies. In fact, the internet is replete with zombie preparedness advice from such sources as the CDC and the Government of British Columbia.

Back in February, Foreign Affairs Minister John Baird stood up in Parliament and, in response to a pointed question from the opposition, assured us that “under the leadership of this Prime Minister Canada will never become a safe haven for zombies, ever.” Terrorists? Maybe. War criminals? A few. But zombies? Not on my watch, he says.

Just last summer, the CDC went to the trouble of issuing a public statement that zombies do not exist. Of course, this only deepens my suspicion. Government bodies are not known for denying the existence of things unless we have good reason to believe that they’re hiding some. It’s like hearing them deny that there are aliens at Area 51: I don’t believe them and neither do you.

But how do you prepare for the zombie apocalypse? With the current explosion of information, it could take you until the apocalypse just to read it all. And then you’ve got all that looting to do, militias to form, it gets busy. In the end, the moral is simple. Stay in shape, stock up on dry goods, and lower your standards. Be prepared to bug out at any time. Learn to fish and get a boat. They don’t always cover this point in survival class, but zombies can’t swim.