'The Neighbors' is as bad as advertised 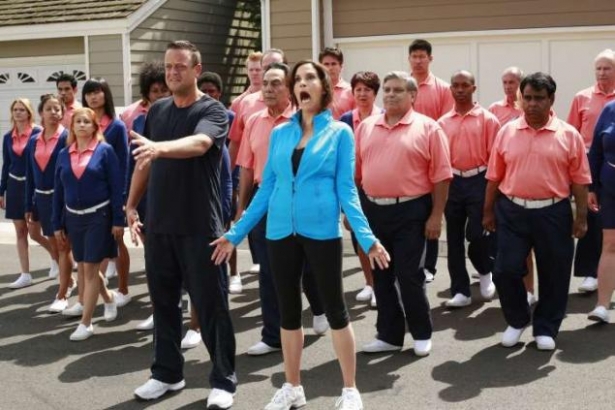 Over the last few years, ABC has made a big impression in the world of television comedy. Its flagship show, Modern Family, is so successful that ABC had to give every full-time cast member on the show a massive raise just to get them back on set in time to film this season. With shows like Suburgatory, Apartment 23, and Happy Endings, the alphabet network seemed poised to split the difference between CBS’ multi-camera lineup and NBC’s self-antagonism, thus creating a stable home for high-level productions which are actually capable of drawing an audience.

So it was a genuine head-scratcher when they decided to use the season premiere of Modern Family to lead into what is undoubtedly the worst single-camera sitcom pilot in recent memory, if not ever. Now, I’m not just saying it was bad. It was aggressively bad. I'm talking stuck in an elevator with Kathy Griffin bad.

Here’s the thing. The premise of this show is that you have an entire suburban neighborhood purchased in 2002 by a bunch of aliens. Ten years later, the residents continue to wait for instructions from the leadership on their home world, yet have received none.

One couple gets fed up and sells their home to a human family, and that’s where we pick up the action. The Weaver family moves into Hidden Hills and discovers that their neighbors are all actually a bunch of affable but awkward green slimy space creatures. But this isn’t Alf, and it’s not Mork and Mindy. The humans are not hiding the aliens, but rather find themselves surrounded by them.

The problem is that The Neighbors attempts to mash up the sci-fi alien spoof and the good old family sitcom. What nobody seems to have realized is that each of them is a sub-genre unto itself. Neither the alien spoof nor the family sitcom functions well as a premise for the other. What you would usually see is, for example, a family sitcom with a characteristic premise which then delivers the hook which draws and sustains a viewership.

With Modern Family, the premise is that the definition of a ‘family’ today is wildly different from the one which has dominated the sitcom genre since the days of The Andy Griffith Show. The relationships stand in stark contrast to our sitcom-related expectations, and hence generate new avenues of comedy and prod us to question some of our ideas of the ‘family’ in general. Or else, you might see an alien spoof like Paul, where the premise is that the titular alien is a smart-ass who decides to take a road trip with Simon Pegg.

What you don’t see is the alien spoof or the family sitcom used as a premise. Watching The Neighbors, you start to see why. A genre (or sub-genre) will have its own stock of conventions and devices, story-telling tools, which allow it to do its thing. When you attempt to run two genres concurrently, you run the risk of their respective devices clashing or cancelling each other out. This is exactly what happens with The Neighbors.

The absurdity of the situation contrives all of the honesty out of the family banter, while the demands of a family sitcom just make the aliens look stupid. Rather than a sitcom or a piece of satirical sci-fi, we end up with a whole lot of neither one. The real question, however, is what the network has sitting in the can to replace The Neighbors when it gets cancelled before Thanksgiving.