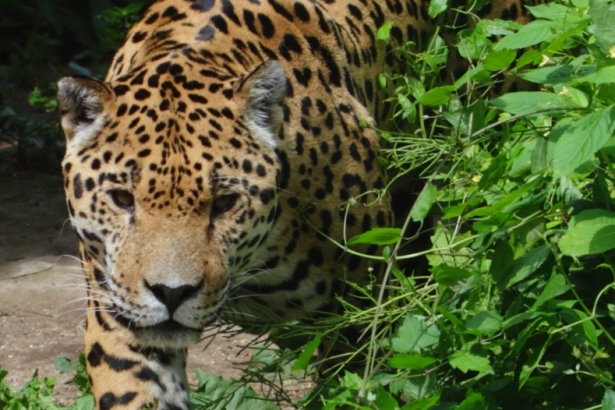 Boasting the most powerful mammalian bite on the continent, this stealthy beast is a natural zombie-killer.

According to naturalist David Mizejewski, the zombie invasion is doomed to fail. In this sense, Mizejewski is an apocalypse denier. A radical voice for sure, but at least it is a voice informed by science.

Nature, says Mizejewski, would not allow zombies to last one week without picking them clean, presumably leaving a few confused skeletons rattling around like some discarded Halloween display.

“Zombies are essentially walking carrion, and Mother Nature doesn't let anything go to waste. Carrion is on the menu for a vast number of species, from tiny micro-organisms to the largest carnivores.”

His argument assumes that the zombie virus will only infect humans, a premise often borne out within fictional accounts, such as The Walking Dead or World War Z. And so long as the virus only converts humans, says Mizejewski, one species’ horror is every other species’ buffet.

For example, take your standard vermin. Rats, mice, and other tiny, scavenging mammals could easily pick away at zombie flesh totally un-noticed. Zombies, if you’ll remember, tend not to notice things.

And then there are bugs, many of whom naturally eat carrion. Expect your typical zombie to emit cloud after cloud of flies, having been infested with maggots early in its existence. (In case you have ever wondered what would make zombies even more disgusting, there it is. Maggots. You’re welcome.)

But even smaller infestations of bacteria and fungus stand to eat their share. Remember, our digestive systems contain several pounds of bacteria just waiting for the right opportunity. According to Mizejewski, bacteria “can obliterate a dead body in surprisingly little time.”

What about birds, you ask? Exactly. If you think carrion, you think vultures. But plenty of other birds will eat the dead, given an opportunity. I expect crows to be the most aggressive. Imagine some poor zombie, just trying to lope along in search of sweet human brains, constantly harassed by marauding crows, picking away at his slowly rotting flesh. Crows are just the worst.

“Ravens, crows, and magpies are expert scavengers, in addition to being bold and extremely intelligent. Many species of gulls, known for their brash behavior when it comes to scoring a meal, would also gladly feed off slow-moving zombies in coastal areas. These birds usually require other animals to break through or break down the tough skin and hide of their carrion meals. So they’d have to wait until the zombies decomposed a bit, or were dismembered by others animals, before they tucked in. But once started, nothing would stop them from devouring the undead with gusto.”

But all of this is merely preamble to the main event: large mammals. Bears, of course, are top predators and scavengers. Plus, a single slap from a bear is enough to send a human head fifty feet away from its shoulders. However, bears also tend to be afraid of humans. It stands to reason they would also be wary of zombies.

Wolves, coyotes, and other feral or wild dogs would also have a good feast on hand. You could even expect non-carnivores to get in on the zombie killing. Imagine some misguided walker, shambling across a grassy plain, gurgling something about “fresh moose.” Before he can say “brains” there is a great trampling of hooves, leaving a zombie-shaped smear on the grass and a herd of moose charging unscathed into the distance.

But only one animal stands out as the zombie’s natural predator:

“Even bigger and more powerful than mountain lions are jaguars, which range through Mexico and are still sometimes found in the desert southwest of the United States. Jaguars also hunt by stealth, and have a special technique to quickly dispatch their prey: a skull crushing bite to the head, delivered with their huge canine teeth. A jaguar bite delivers 2,000 pounds of pressure per inch, the most powerful mammalian bite on the continent. That, combined with a killing technique perfect for dispatching zombies, makes the jaguar its natural predator.”

And there we have it. Crushing bite to the head. Nature is truly horrifying.

Mizejewski predicts that a zombie invasion will be devoured by nature within as little as a week. This seems overly optimistic to me. It also neglects the real issue here.

In this scenario, zombies are jaguar food. There will be a lot of zombies. Hence, with all this new food, we should expect a boom in the jaguar population. The longer the zombies last, the more jaguars there will be, and the more practice they will have at smashing human skulls. In time, zombies will be wiped out and the surviving humans can look forward to getting eaten by homicidal jaguars who, by then, have developed a taste for human brains. Somehow, I’m not sure that’s better.