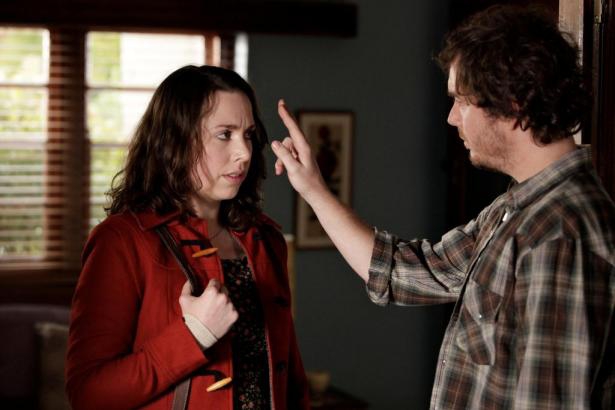 It’s not often that you see an Australian show that gets your attention. Combine the relatively small production slate with the fact that Australian shows just don’t get a lot of press worldwide and you never really get a reason to expect any interesting television from the Aussies unless it features some guy who knows how to beat up a crocodile. And then there’s Laid.

The show is about a young Australian woman, Roo (Alison Bell), whose exes all start dying for unrelated reasons. To be more specific, every guy who has ever slept with her meets his end in sequence, according to the order in which she slept with him. Finding it far too creepy a coincidence, Roo and her best friend EJ (Celia Pacquola) set out to solve the mystery, with EJ getting strangely excited by the prospect of a forensic treatment of Roo’s sexual history. The premise is undeniably surreal. Yet it manages this without feeling forced.

In large part, this is because the characters are well-drawn and understated. Roo is an awkward single woman who works at a market research firm and has an ongoing flirtation with the office IT guy Charlie (Abe Forsythe). EJ is an independent woman with an on-again off-again boyfriend who is basically a somehow loveable, shallow and stupid layabout. Every character is sufficiently flawed without being cartoonish, which keeps the premise from riding off the rails. The situations that play out among friends and family feel honest, rather than contrived just to advance the plot. The characters do what people would do within the situation and the plot seems to work around it.

The result is a very funny and very dark comedy which is definitely worth your time if you like things that are funny, awkward, absurd, and yet strangely compelling. After all, there is the central mystery to the show: why does every man who has sex with Roo wind up prematurely dead? Seriously, it’s funnier than it sounds. What’s more, it is unlike any other show on television.

Now, anybody who knows me knows that I am a big fan of quirky, out-there comedy, so this show is well-suited to my tastes. If you don’t care for black humour, you might not enjoy it as much. If you do, then this show is a little gem. Laid airs on Superchannel Tuesday evening and is currently in season two.