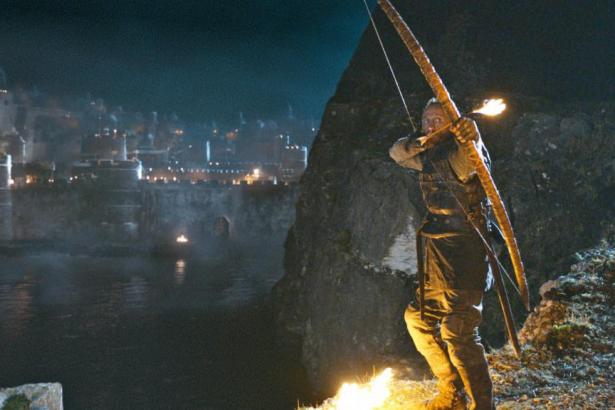 Throughout the second season of HBO’s Game of Thrones, there have been grumblings that, while the show remains very good and the plot continues to advance, it has become too talky for a fantasy epic. Many have complained that the show cuts out too many battle scenes, especially considering that the entire season has been about a vast and complex war slowly making its way to King’s Landing. We saw Robb Stark preparing for battle, the initial charge, and then cut to the aftermath. We saw Theon Greyjoy having taken over Winterfell, but not his assault. Of course, all season we have seen Jaime Lannister in chains, prisoner from a battle we never got to see in the first season.

All of this can get a bit frustrating to fans who, having seen the rest of this world rendered with such brilliance, are clamoring to witness the same production values at play on the battlefield. Sunday’s episode repaid their patience in full with some of the most spectacular television ever produced.

Perhaps the single best decision made with this episode, written by George R. R. Martin himself, was to completely eschew most of the disparate storylines and to focus on Stannis’ assault on the capital city. This marks the first time in GOT’s first two seasons that an episode has shown such a narrow focus. It is hard to imagine how they could have conveyed the events of “Blackwater” without such a narrow focus. Not only did it allow for sustained battle scenes, but it also let us see Cersei and Tyrion for much longer than usual, developing those characters in ways which we have not seen before. The conversations between Sansa and the drunken Cersei were perfectly executed and left us with a deeper appreciation of Cersei’s personal demons and a sense that Sansa is getting ready to emerge from her guarded shell. It played like a before-and-after picture in conversation with itself.

In particular, did you notice Sansa baiting Joffrey before the battle? Casually, she mentions that her brother always leads his troops into battle “and he’s only a pretender,” she says. It has become clear this season that both Cersei and Sansa hate Joffrey, or are at least disgusted by him, each in her own way. Cersei just wants to see the best of either herself or Jaime reflected in her son the king, and instead only sees a monster. Sansa wanted desperately to be a lovely queen to a valiant king but now only sees that same monster in place of the prince about whom she had dreamt. It will be very interesting to see where she goes from here. Sansa has seemed quite limp as characters go, but she has also shown a rare patience which suggests to me that she has potential to be the most surprising. Her pairing with the Hound sets up some serious potential for her own transformation moving into the next season.

Another common grumble about GOT is its apparent lack of a central hero. As the battle unfolded, it became clear that Tyrion is as close to a hero as the Lannisters have at King’s Landing in the absence of the family patriarch Tywin. For a man who has never fought a battle before, never led troops or coordinated an army, he emerged as the ruling family’s greatest champion. And really, it seems like that is what GOT has in lieu of heroes: each faction has its champion. Robb is champion of the Starks and of the people of the North. Stannis is champion of the Baratheons, undisputed after the murder of his brother Renly. And while the Lannisters’ champion ought to be the cowardly and sadistic King Joffrey, in reality it has always been Tywin, and in practice it is arguably the brilliant Imp. In fact, Tyrion now looks like the only character who deserves to sit on the Iron Throne. Look out, Tyrion. That kind of thing gets characters killed around here.

As for the battle itself, I struggle to think of many noteworthy criticisms. The scene with the wildfire was simply jaw-dropping. Stannis’ vast fleet was crippled in a heartbeat as Tyrion’s unmanned ship, leaking wildfire into the sea, was ignited by a flaming arrow, sending a massive green explosion across the water. Of course, I did find myself wondering how they set it to leak at just the right time. If the boat was unmanned, then it ought to have needed to be set to leak wildfire from the moment it was launched. But then shouldn’t the green flames have also made their way back towards the shore? Couldn’t they just have used its green trail as a fuse, avoiding the whole problem of shooting a flaming arrow across an enormous fleet of ships to hit a small patch of ocean in the middle?

The battle at the gates had the right frenetic quality, with the cooler heads being those of Stannis, Tyrion, and Bronn. The Hound delivered the most spectacular blows, cutting at least one man clean in half in a spray of blood. This was easily the goriest part of the series so far, as it should have been. The battle looked vicious, dirty, and horrifying, exactly as it should. Scenes like this are not easy to watch. However, like GOT’s treatment of nudity and sex, it may be graphic, but it is never gratuitous. Curiously, the Hound was not amongst the cool heads in battle, at one point simply turning around and walking back through the gates. My impression was that he got spooked by the fire. If you remember from the first season, the Hound’s scars are from having his face held down in the embers of a burning fire. Did it all get to him, with the fire and blood everywhere? Did he just decide “Fuck this, my king is an idiot, half my men are dead, and god(s) dammit I’m scared. I quit. Say, where’s that nice redhead?” It’s hard to see what the Hound thinks he might do after going AWOL on Joffrey, but it does set up a premise for a major showdown at some point between him and his enormous and vicious brother. Look for that next season.

There remains a lot to wrap up before closing the season, which may be why the season finale has 10 extra minutes. Some of that ought to be spent on Tyrion's fate after taking a serious wound from a sword across the face from an ambiguously-attired assailant. Expect the finale to follow a more standard GOT progression, addressing several different stories within the sweeping overall series arc. In particular, I am excited to see Daenerys go to the House of the Undying. Seriously, does that guy creep you out or what?