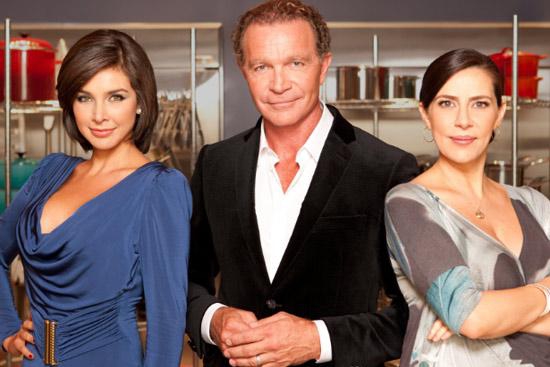 Warning: this post contains spoilers for anyone who has not seen this week's Top Chef Canada.

This week’s Top Chef Canada gave the competitors two of the toughest possible tests. First, it was the blind taste test. However, as if tasting blind wasn’t hard enough, all of the items they tasted were proteins! It may be difficult to imagine what’s so hard about this, so allow me to explain. First, many meats have similar textures. If you had strawberries, you could use the contrast between the pulp and the seeds to help figure it out. The textures of many foods can be as distinctive as their flavours. With meats, whatever you are tasting, there will always be a wrong answer with the exact same texture.

Also, they appeared to be tasting cold or room temperature meats. Not only are aromas muted at cool temperatures, but anyone who eats meat will be accustomed to eating it hot. When it is cool, it becomes harder to distinguish from a similar product. Also, it is not a familiar experience to taste something cool while blindfolded, so your brain does not tend to make the same connections. You really need to work to figure it out, looking for the most subtle, distinctive notes and then connecting them to the correct protein.

When it came time for the elimination round, the chefs drew knives to find out which organ meat they had to prepare. This challenge struck me as deeply unfair. Some chefs got relatively easy ingredients like liver, kidneys, and sweetbreads. Almost any chef is likely to know how to prepare these, or at least to have worked with them in the past. Others got things like tripe or intestine. If you don’t know how to prepare these, you are in trouble. Sure enough, it was trouble for Curtis, who got the lamb intestine, and Gabriell, who got the dreaded tripe. Each fell into the same trap of trying to dance around an ingredient he had no idea how to prepare. In the end, each presented a dish that was confused and did not embrace the ingredient.

It is undeniable that some ingredients were far more difficult than others. Duck livers have several common applications, many of which might appear on a fine dining menu. Tripe is something you eat on a dare or after losing a bet. Beef heart cooks similarly to steak. Lamb intestine seems to have almost no purpose except as the casing for a sausage, and even then you need to cook it correctly or else it gets chewy.

That said, it was the charming Sergio who got eliminated for a poutine that looked like a bowl of mud and shoe leather. Really, this one will confuse me for the rest of my life. How could he even send that out? He is clearly much more talented than that and certainly knows better. In the end, it was his own indecision that got him. He had a good idea at first, to use the tongue essentially like an ordinary piece of braised beef, building a plate around it as the central component. The description of his initial idea was of a dish which would not have sent him home unless he messed everything up. The dish he presented was guaranteed to send him home unless everything was perfect. Poutine is just fries, gravy, and cheese curds. You need to elevate it to make it Top Chef material and his failure to do so was like a slap in the face to the judges.

On the positive side, Vancouver’s own Jimmy showed that he is a very smart (pardon the pun) chef with his calf brain ravioli. This dish announced Jimmy as an early contender. Putting the brains in the ravioli allows him to avoid many problems, like the appearance and the risk of over-cooking, while packing the brain in a little dome which slightly resembles a skull. Also, because brain is fairly rich, it allows him to get away with a small portion without it looking small. But I was most infatuated with his play on celebrity guest chef Chris Cosentino’s famous nose-to-tail philosophy by applying it to a vegetable. Celery was easily the right choice, with the leaves, stem, and root having such distinct flavours and applications, all of which compliment the ravioli. It also allowed him to give the plate texture without confusing it with too many ingredients.

Elizabeth and Carl each did their proteins justice, although Carl’s beef heart was definitely an easier draw that Elizabeth’s pig ears. Watch out for Elizabeth. She is gaining momentum.

However, the day belonged to David, who finally earned a measure of redemption with his duck liver ice cream. Believe it or not, this is not all that crazy. Savoury ingredients can often shine in an ice cream application, including very rich ones. For example, one of my favorite ice cream flavours is avocado. I know, it sounds strange. But the thing about it is that the cold application mutes some of the less pleasant notes in the avocado while allowing the more buttery and floral ones to shine. It is an unexpected pleasure and, for someone who does not care for very sweet things, a perfect ice cream.