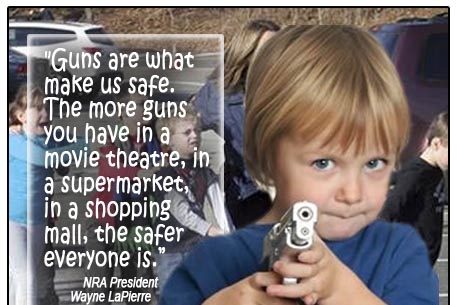 The National Shooting Sports Foundation (NSSF) speaks proudly on its website of how the gun industry benefits America.  In its Firearms and Ammunition Industry Economic Impact Report 2012, the foundation outlines the economic benefit the gun industry has brought to every state in America.

"The economic growth America's firearms and ammunition industry has experienced over the years has been nothing short of remarkable," NSSF's website says.

Good jobs and tax revenue are two boons,  jobs that pay nearly $50,000 annually, "And today, every job is important," the website crows.

Not only does the firearms and ammunition industry create jobs, it also generates sizable tax revenues. In the United States the industry and its employees pay over $2.07 billion in taxes including property, income, and sales based levies.

In America the right to bear arms "is one of our oldest freedoms, and it’s a freedom nearly 2 million Americans exercise each year," Statistic Brain reports.  The site says the firearm industry saw a decline after the assault rifle ban of 1994, but has since seen a steep increase since the ban expired during the Bush administration.

The increase in sales have continued through the Obama presidency, Statistic Brain says, "as many buyers believe they may not have the opportunity in the near future."

Three and a half million firearms were produced annually over the last eight years, state Fish and Game Departments have report.  This does not include military production.

Surging sales have been widely reported over the last year, with gun stores unable to meet the demand and keep enough stock to satisfy gun-hungry customers.  A surge followed the movie theatre massacre in Colorado, after which there was fear that the incident would fuel a movement for more gun control legislation.  The fear was unfounded.  During the U.S. presidential debates, the candidates were never asked a question about their positions on enacting stricter legislation.

On the Smith & Wesson website, a shopper can find and purchase the instruments needed to commit the creepiest crimes. Handcuffs, body armor, etc.  It's a virtual gun show with the American flag embedded in the branding.

Earnings from continued operations, (after excluding company’s discontinued security business), rose to 24 cents from a cent. Net sales soared 48% to $136.6 million, thanks to robust demand for its entire product line.

Smith & Wesson was founded in 1852 by Horace Smith and Daniel Wesson and when the American Civil War came along 10 years later it turned the company into a major manufacturer, the BBC reports.  Germany, Austria and Italy lead the way worldwide in share of ownership of the gun manufacturing business, a result of the buildup of armament manufacturing during World War II.

The company's most famous models are the Model 29 .44 Magnum - made famous by Clint Eastwood in the Dirty Harry movies of the 1970s - and revolvers chambered for the .357 Magnum cartridge.

The Smith & Wesson Model 10 firearm - which fires .38 Special ammunition - is the only handgun in the world to have been in continuous production since it was introduced in 1899, with six million produced.

It was popular for many years with law enforcement, but has been gradually superseded by the Glock 17.