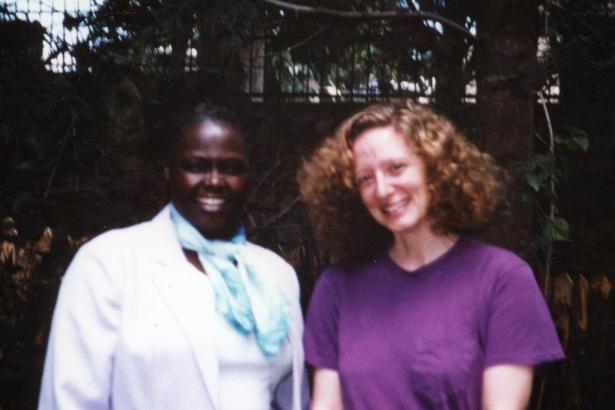 I just read that Wangari Maathai has died at 71 from cancer, and am filled with sadness.  I spent several weeks with Maathai in the early nineties, and she has been a source of inspiration to me ever since.  She showed me  that one person really can make a difference, and that when brilliance is matched with love and hard work, it has the power to transform entire societies.

Inspired by her remarkable courage in the face of a totalitarian government, her environmental work with women and her sometimes seemingly  single-handed ability to stop a dictator's evil, narcissistic plans, I looked for other women of her caliber.  After getting to know Wangari, I found Medha Patkar in India, a determined social worker who was fighting a World Bank Dam that would force more than a million farmers from their lands into slums.  I then discovered Noreen Kaleeba, in Uganda, after being told be a university professor that Kaleeba was "a saint" who had created the first grassroots response to the epidemic of  AIDS in Uganda.  They were all women who were changing their societies against  impossible odds and improving the quality of life for ordinary people.  But it all started for me with the professor from Nairobi.

I learned from her how much one life could mean, its power to effect millions.  I went to Nairobi three times to interview Maathai. I had researched her at length and I knew all about her many arrests for challenging the dictator's desire to pave the central park of Nairobi.  I knew about how she'd been responsible for women and children planting more than a million trees in Kenya and staving off desertification.  I knew about how this effort had created a cottage energy in tree planting for the women and was the first source of independent income for most of them.

The first two times, I arrived only to be told by her secretary that she had gone underground, fearing arrest or worse.  When I finally managed to  meet her, it was well worth the wait.  She was everything I'd imagined she'd be, and more.  She was already famous, but was welcoming and humble.  She seemed to greet all of the endless people who came to talk with her with genuine interest and an open heart.

I spent more than two weeks hanging out around the Greenbelt Movement Offices, which were in her home, and talking with a woman who seemed to me to be the most outstanding woman in the world.  I spent hours sitting in the garden outside the house on a bench in front of a fenced in goat who liked to stand on his hind legs observing me.

The sound of her laughter spilled from the windows.  She was all about building relationships.  The core of the Greenbelt Movement was her relationship with her best friend Virt Mbaya.  They talked and laughed endlessly, Wangari and Virt.  They were both university professors and  in their fifties when I met them. One widowed, one divorced.  And they were both beautiful.  Virt's husband had died in a car crash that she suspected may have been a concealed murder by the government, and Wangari's husband had divorced her and publicly condemned her.  She was too strong for him. Women at that time in Kenya were not supposed to oppose men, or be openly as smart or smarter than them, or just do what they thought was best.

She regretted the failure of her marriage, she told me.  But it didn't stop her from going on to a stunningly remarkable career.  Mother of three children, the first woman to become a biology professor in Africa, she broke many barriers in her lifetime and went on to win a Nobel Peace Prize.

I was lucky to have a glimpse into the life of one of the greatest women of our time, during the years when she was as radiant as the sun. At fifty, gorgeous. Having completed the bulk of her work with the Greenbelt Movement, full of energy. And laughing.  Always laughing.  No matter what came at her.  No matter what stood in the way.