CRTC digs in heels on UBB 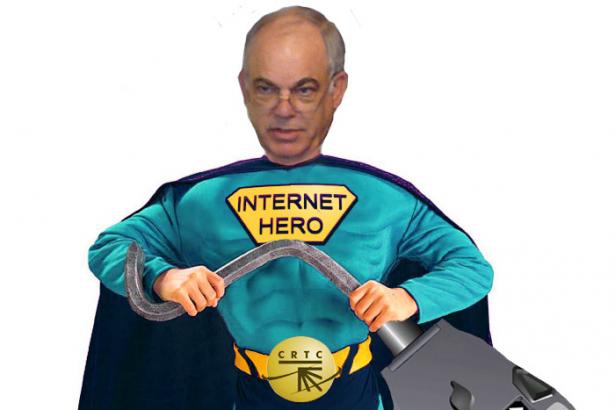 We need an internet hero, says OpenMedia.ca. CRTC Chair Konrad von Finckenstein is pictured above as the hero OpenMedia hopes he will be.

A letter from OpenMedia.ca this morning explains that the fight against internet usage billing isn't over. Here's what you can do about it.

OpenMedia.ca asked Canadians to send Ottawa a message about Internet metering (usage-based billing), and wow did you ever respond – over 420,000 have signed the petition!

We’re excited that we’ve come this far, but the issue has been put back before the CRTC and they’re digging in their heels.  When the CRTC Chair Konrad von Finckenstein was dragged before politicians, he said the CRTC still wants to “find economic ways to discipline the use of the Internet”.

To win, we urgently need to encourage Konrad to be an Internet Hero. Send a message to the CRTC HERE.

An historic level of public engagement led all the major political parties to vow to fight the meter. Minister Clement called for a review, but we don’t know what kind of ruling he will accept. We can all be sure an industry-friendly compromise is being crafted behind closed doors.

We must sway the CRTC now to make our previous victories stick. If we don't convince the CRTC, all could be lost - all Internet users could face a metered Internet and pay up $4 per gigabyte!

To send a clear message to the CRTC, we need to reach a new milestone -  half a million signatures. Sign HERE. We need to remind the media that we’re working with historical numbers of Canadians.

After you sign, be sure to share it with your friends and family – this is how we win.

We’ve already moved politics in Canada and made it easy for politicians to champion the Internet. Now let’s the do the same for the CRTC – let’s encourage Konrad to be an Internet hero.