"Science, projects online, fearsome media and haunted spaces, between TV news, computer generated sexual depravity, family upheaval, even copyright infringement..." all serve to spook in the way that new technology, the telegraph, radio, the telephone...definitely movies... has always both horrified and thrilled its users," he continued. "We have Facebook possibly causing syphillis, according to the Telegraph... It''s fascinating to see themes and trends persist or vanish." Then his punch line: "Whenever we invent a new medium we haunt it..."

Psychic Cassandra MacLeane and Clare Coughlan of Clevers Media listen to Alexander.  He spoke without the use power point or projector and, in his own words, used his hands to gesticulate, and gestures cast magic, he said.

Alexander talked the demonization of the web, web as horror show, the way a beautifully designed new device thrusts its user into the future, the power of mystery in storytelling, social networking, journalism and online publishing. "Teenager sexuality is often the focus...this is an iteration of a  very old practice of the suspicions adults often hold about teenagers.  It's a double-bind.  These kids are not only horny (this thinking goes) but they use newfangled technology to hook up!   (the role of the internet in making it worse...don't use Myspace or child predtators will get you.  terrorists have been associated with online media fears since 9/11.  This is where we here the ever popular term 'E-Quaeda.'  We're talking about...this great term 'I-jihad.'"

Referring to works of literature that throw the reader off kiltre, like Maus the graphic novel about the Holocaust in which the Nazis are depicted as cats and the Jewish population as mice, Alexander emphasized how unusual real mystery is.  Viral marketers, he said, are spending their whole careers seeking works that impart mystery, the next video, game, blog, etc.

He talked about how stories like this freak people out, despite how rare they are.

Describing himself as a native New Yorker amped up on coffee, Alexander engaged the audience in the atrium of the Life Sciences Centre at UBC for nearly an hour.

When asked at the end of the talk by a reporter  what he thought of a Canadian Supreme Court decision yesterday declaring that journalists do not have a right to protect their sources, Alexander said it would push whistle blowers to go elsewhere than to traditional journalism institutions to report government and corporate corruption.  Future Deep Throats, he said, will make use of options like Dutch-based Wikileaks that exists for anonymous reports of threats to democratic institutions.

Photo of me and Bryan Alexander by Miss 604 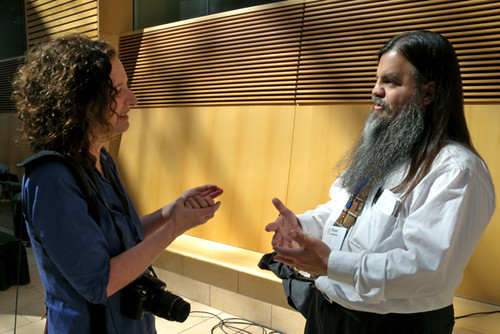