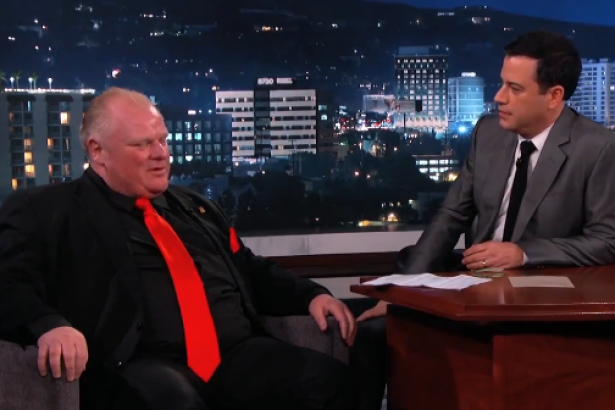 Oh no, not again—Rob Ford continues to crave ever more publicity, and this time it was on Jimmy Kimmel Live.

And last night Ford shared this less-than-prestigious distinction with none other than Gonzo, all the way from Sesame Street—what an honour!

Thanks for nothing, Jimmy.

What is it about Rob Ford that he simply won’t allow himself to see what a buffoon he’s become? He truly seems to think that people are actually interested in meeting and getting to know him as a person, rather than for the endless jokes he provides material-starved late night TV hosts—not to mention the ever-blackening eye he keeps giving Toronto and, by extension, Canada as a whole.

And this time was no different. Silly me, for thinking it might have been.

Even the not-funny schtick they did together to promote the show, where Ford pretends to arrive on the set a day early, paints him as an absent-minded, senseless chump. By making one disastrous decision after another, Ford continues to give my beloved country shiner after shiner.

So I am now officially done with Rob Ford—this will be my last time watching him, writing about him, giving him any of the incessant attention he can’t seem to get enough of. For me, this interview was incredibly boring from beginning to end—tedious and lackluster, absolute drivel bordering on horrific and bullying.

As Ford this time allowed himself to be fair game for the almost as disgusting Jimmy Kimmel, I barely cracked a smile. In fact, Kimmel’s best line was right at the beginning of the segment: “Why are you dressed like a magician?”

I must admit, I was wondering the same thing the minute Ford appeared. He looked like a pathetic idiot who was trying, pathetically, to look cool.

Their time together was a train wreck clearly showing Ford as the delusional crazy man he is. But, to be honest, I think it made a bigger fool out of Kimmel himself. Clearly, his intention was to be as offensive and brutal—in the guise of being funny—with Ford as he could get away with. Who does that? Why do that? Just for ratings? I am not impressed.

In fact, the two of them seem to be a strangely sick and twisted odd couple—and here’s how we know: the horns on Jimmy Kimmel’s head seem to fit just perfectly into the holes in Rob Ford’s head—and isn’t that a match made in some kind of dysfunctional, addictive, supremely nasty, just-for-ratings heaven?

Not only will I stop giving Rob Ford any more of my attention, I will likely never watch Kimmel’s show again either. This whole fiasco, in my humble opinion, was a big yawn and it’s time to stop enabling both of them.