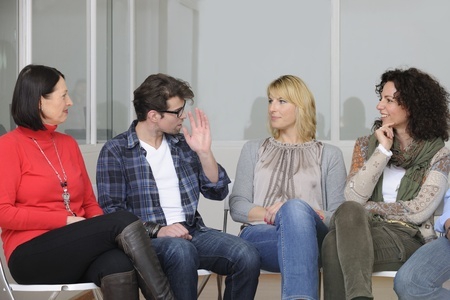 I’ll always be grateful to 12-Step programs. Along with some other amazing Earth Angels that came into my life just at the right time, I credit 12-Step meetings for quite literally saving my life.

Twenty-seven years ago, that Spring when many things begin to change and grow, I reached a new low with my drug addiction when I was diagnosed with Crohn’s Disease in 1973. From that time on, I began faithfully using the prescriptions given to me by my doctors: medications like Valium, Codeine, and Demerol-- not to mention the marijuana I chose to smoke daily just to offset both the pain and the shame of dealing with an increasingly debilitating inflammatory bowel disease. Nearly 15 years later, in 1987, I was so depressed and sick that I had become suicidal.

Life was definitely not a party for this isolated, shame-based addict.

When I began going to Narcotics Anonymous, I was willing to do “whatever it takes” (to quote their literature) to become healthier. I wasn’t sure what recovery would look like for me, but it had to be better than the active addiction I’d been into for so long. A shy introvert, I gratefully met like-minded people who told me to “keep coming back”—something I’d never been invited to do in my birth family. I made friends and went to lots of meetings in a variety of 12-Step fellowships. Recovery from addiction has been my life’s work ever since.

But somehow I never felt completely at home there—as much as I deeply yearned for just that. When I look back, I think this had to do with not being able to be entirely honest about something quite important to me.

I have long been fascinated with all things spiritual. I recall reading both “Siddhartha” by Herman Hesse and the Bible when I was 11 years old, while most of my peers were still playing with Barbies. But I have never considered myself to be a religious person—the Judeo-Christian concept of “God” that I’d been taught about as a child always seemed to be too small for the amazingly vast cosmos that is the Universe. And I certainly didn’t see God, whatever it was, as a masculine Him.

As a result, I found the wording of several of the 12 Steps problematic. When I raised that issue with some of my newfound friends in the program, I was told that I could have any Higher Power I wanted. I recall one person telling me that power could even be a doorknob.

Much of the Christian concepts and language in the 12 Steps didn’t work for me. I remember sitting in meetings when the Steps were recited—at least once in every group-- and inwardly changing the wording of the steps. And when I told someone I was doing that, I was criticized and told that I had to say the Steps exactly as they were written. The shame of that scolding burned for some time in my sensitive psyche. I stopped talking about it and just tried my hardest to fit in—just like many people do, especially as newcomers.

The real problem, as I understand it today, is the very dogma of the program. It stipulates that the Steps must, in 2014, continue to be read, recited, and studied with exactly the same wording as when they were developed, way back in 1935 by two financially well-off white Christian males. The needs of a vast part of our addicted population have changed dramatically since then, but we’ve basically been "shamed" into maintaining the 12 Steps exactly as they were originally written, complete with ‘shortcomings’ and ‘defects of character’. Concepts I've had trouble with. Times have changed substantially since 1935, but the Steps haven’t.

At least, not until recently.

I’m discovering that we now have a number of wonderful alternatives for those who are seeking something different. Some very courageous addicts in recovery have formed groups based on a variety of 12 Steps that do not follow religious language. These steps are available on the website AA Agnostica, and these alternative groups have been growing in number due to the desire of many recovering addicts to be more spiritually honest in the programs they work and the language they use.

I know that many people have no problem with the fact that the Steps have remained the same as they were in 1935, using religious language. If the original 12 Steps are a fit for you, then there is no reason for you to change anything. But for those of you who are looking for something different, I suggest that you check out these alternatives. I wish these groups had been around while I was attending 12-Step meetings for the first 5-10 years of my recovery. I’m very glad to know that they’re here now.

Whichever set of Steps you choose to use, I wish all of us an active recovery: another 24 hours of abstinence from our addictive behaviors, one day at a time. May God, Goddess, Creator, Great Spirit, Higher Power, Universal Force—or whatever name feels right for you—be with us always.

Oh no, not again—Rob Ford continues to crave ever more publicity, and this time it was on Jimmy Kimmel Live. And last night Ford shared this less-than-prestigious distinction with none other than...
Candace PlattorMar 4th, 2014