Condolences and praise poured in for former Alberta Premier Ralph Klein, who passed away on Friday, March 29, at the age of 70.

"We remember what a force of personality he was, how driven he was, how motivated he was, how straightforward he was, and that we trusted him implicitly.” – Alberta Premier Alison Redford

“While Ralph's beliefs about the role of government and fiscal responsibility were once considered radical, it is perhaps his greatest legacy that these ideas are now widely embraced across the political spectrum." -- Stephen Harper.

Yet, as the compliments poured in, it must be remembered that Klein was one of Canada’s most aggressive neo-liberals. “King Ralph”, as he was widely known, served as premier of Alberta from 1992 to 2006.

A problem-drinker, Klein was forgiven for many of his personal blunders by frontier-mentality Albertans who believed in rugged individualism and small government.

No matter how rude Klein became, he remained a darling of the mainstream media. When a drunken Premier berated poor unemployed men at midnight at a homeless shelter, telling them to get jobs and throwing money at them, he was forgiven by media because, well, it was Ralph and that’s just the way he was.

However, the homeless shelter incident is a clear sign of how the establishment and its media viewed the plight of the poor with indifference.

Klein’s true legacy is a string of anti-social policies and programs.

Klein was possessed by the unnecessary goal of eliminating Alberta’s debt in what was becoming the country’s most wealthy province. In just over a decade he paid down the debt of $23-billion, cutting in critical areas such as health care, education and social services, and killing the government pension plan, privatizing liquor stores and license offices.

Klein slashed thousands of jobs, and showed contempt for the tens of thousands of protestors who fought against his policies.

He also believed strongly that health care services should be provided by the private sector. His government paved the way to allow provincial health authorities to buy medical services from privately-owned medical companies. The federal government, committed to national health care, reminded Klein of his government’s commitments to deliver public health care. However, Klein allowed some questionable services to be privitized.

While Klein was sold as a man of the people, he clearly favored the rich. In 2001, he made Alberta the first jurisdiction in North America to replace a progressive income tax with a “flat tax” – the dream of extreme right-wing ideologues in the U.S. It gave huge tax breaks to the rich. In 2009, the University of Alberta’s Parkland Institute said that the flat tax was costing the province in excess of $5-billion a year in tax revenues.

A key incident raises questions about Klein’s honesty. In 2004 – when he was Premier – Klein was accused of plagiarizing a paper for his degree in communications from the University of Athabasca. The Edmonton Journal reported that about five pages of a 13-page report on Chilean politics and media were lifted directly from various Internet sites. Surprisingly, Klein was not failed, but instead was given a grade of 77 per cent on the paper.

After eliminating the deficit, Klein basically left politics because he had no idea what else to do in government.

When the tired and worn out Premier needed a soft “retirement” gig, it’s believed that about 20 of his wealthy oil and business friends chipped in to provide a $2.5-million anonymous gift to set up the Ralph Klein Chair in Media Studies at Mount Royal. Normally endowed chairs are limited to academics of considerable distinction.

He got off to a bad start. The former premier – who couldn’t make it to his office before 10 a.m. – said journalists were lazy. The students were stunned when the man who ran the province for so many years admitted he didn’t read newspapers or watch TV news. Klein can be praised – or blamed – for the early development of the tar sands. In the mid-1990s, it was unclear whether the tar sands would become viable. When Ottawa introduced a tax write-off (i.e. a give away) for oil sands investment, Alberta allowed oil companies to pay a royalty of one per cent (i.e. a give away) until developers recovered all project costs.

According to environmentalists, nearly every tar sands project was approved without any consideration given to the impact on the environment or greenhouse gas emissions.

In many ways, Klein was a tragic figure. He was a one-issue populist who got elected to eliminate the deficit dragon – an unnecessary calling that damaged health care, education and social services so seriously critics say they still have not fully recovered.

Political leaders and journalists provided the usual hyperbole to describe a fallen man. Hopefully, history will do a better job of providing the true story of Ralph Klein. 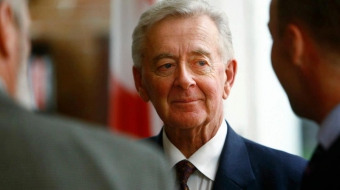