While Conservation Works is still in its infancy (the organization doesn’t even have a website yet), Solberg is confident its message will resonate.

“[At this time next year] I’d like to see regular Canadians feel they have a voice that represents their point of view, and secondly I’d like to see Conservation and common sense conservation be a central plank in the platforms of political parties in Canada.”

The Shield, the Sword and the battle ahead

To be fair, there were still climate change skeptics and global warming deniers in attendance at the Manning Networking Conference. But their ranks were slim and voices muted among the greater discussion of expanding the Conservative 'big tent'. As Preston Manning said in his Saturday keynote address, “We need to change the climate of the environmental conversation in Canada…[because] whether we agree or not, whether it’s fair or not, the bad news is that this perceived deficiency on the environmental front has become a political and economic liability."

And the Conservatives are not here to lose.

Throughout the convention, the halls buzzed with talk of the latest National Post pollshowing that Justin Trudeau’s Liberals would beat the Conservatives handily if an election were held right now. The Manning Centre’s own 'Barometer Poll' revealed a similar result, including the surprising statistic that the majority of Canadians would rate environmental protection a higher priority than oil sands expansion. If the Conservatives want to ensure a majority victory in 2015, they need to show Canadians they can be environmental leaders and "harness a multitude of local and small-scale initiatives to the task – the “little platoons” of civil society”.

It’s a place where Manning feels Conservatives can hold the moral high ground, particularly at the federal level.

“Conservative political strategists and policy makers need no longer treat the environment as a “shield issue” as we have in the past, but begin to treat is as a “sword issue” on which we can take a positive and proactive approaches to selling community and market-based solutions to environmental challenges.”

The final speaker of the convention is British politician and YouTube celebrity Nigel Farage. He mugs and crows his way through a bold denial of the existence of global warming, delivering a 'fact' I first heard from Lord Moncton when he was posing as the delegate from Myanmar at the UN climate talks in Doha, Qatar. The assertion that the planet has not warmed since 1990 is as far from the truth as Master Farage wishes to be from the Eurozone.

Still, as he says it, I hear someone to my left start applauding as Farage lays down the hammer on the green agenda. They managed only three brief claps before realizing the room was otherwise silent.

It’s a small moment, but with everything I’ve seen this weekend, it feels like a sign. And somewhere in downtown Toronto, a certain TV personality frowns. 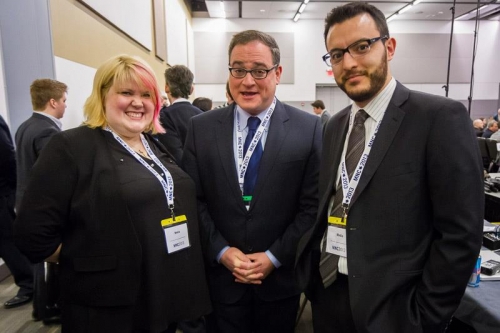