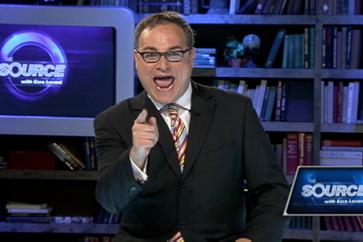 When the Canada Broadcast Standards Council (CBSC) ruled that Sun News Network commentator Ezra Levant had breached the council's code of ethics, he fired back immediately by questioning the CBSC's political leanings.

"The CBSC (Canadian Broadcast Standards Council) is demonstrably anti-conservative," he wrote in an email to The Vancouver Observer.

Paraphrasing a quote by Voltaire, Levant said that he disagreed with his progressive counterparts but defended their right to be heard, and asked why he was being "censored" by the council.

"I think even left-wing wackos have freedom of speech. I'm just pointing out the systemic bias."

The case for civility in Canada's political discourse

Levant has sparked controversy for his strong language in the past, calling the Occupy Toronto movement a "dirty, semen-stained, overflowing bathroom protest” last October.

But the author of Ethical Oil  had apparently crossed a line with his commentary on December 22, in which he blasted Chiquita Brands International senior vice-president Manuel Rodriguez for allegedly proposing a boycott of products from Canadian oil sands. Levant pointed to the camera and told the Chiquita executive: "Chinga tu madre", which literally translates to "F*ck your mother" in Spanish (Chiquita Brands later claimed that the boycott rumours were untrue).

Although The Vancouver Sun later ran an article in defense of Levant's user of the expression, explaining the "proper" definition of Chinga tu madre among Mexican Spanish speakers, the CBSC ruled that Levant's broadcast contained a coarse insult directed at a specific named person," which violated Clause 6 of the council code.

Journalist David Climenhaga was among the first to file a formal complaint against Levant following the broadcast. He commented on his website that the ruling was "fair, accurate and balanced, and called the ruling a "victory for civility in the Canadian political discourse".

Last year, Sun News Network sparked a debate over civility when Krista Erickson gave a one-sided and aggressive interview of Canadian dance icon Margie Gillis, resulting in a record 6,676 complaints to the CBSC (the annual average is around 2,000). In February, however, the council "cleared" Erickson -- it did not come to the same conclusion, however, in Levant's case.

The right to free speech?

So is it okay for a commentator to tell a person "Chinga tu madre" on television? Levant did not comment on whether there should be limits on language, but emphasized his right to the same free speech as other commentators.
"Imagine if David Suzuki were subject to such censorship -- if his shows would be censored because they didn't have the contrary point of view on things like the theory of man-made global warming. He wouldn't put up with it," he wrote, adding:

"I wouldn't put up with it, either -- I don't think Suzuki should be censored."
Climenhaga, meanwhile, suggested that there was no basis for Levant's claim that the CBSC was persecuting him because of his political stance.
"It may be that right-wing organizations are more prone to make obscene, racist, sexist, homophobic or otherwise inappropriate remarks," he commented, "but more likely Mr. Levant is just twisting the facts to fit his ideological viewpoint."
Read More:
Share on Facebook Share on Twitter