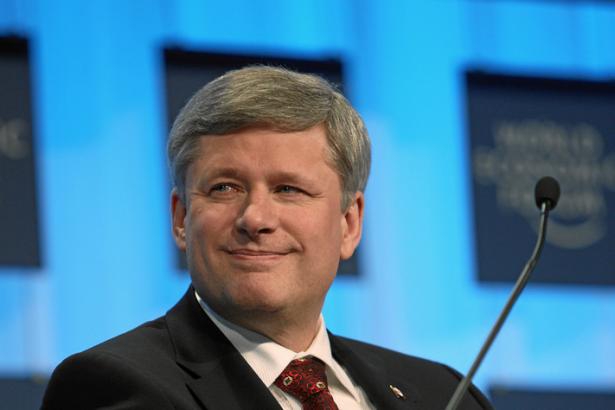 Thanks to our PM, Canada's presence at the Durban climate talks has been likened to that of an uncle who shows up at Thanksgiving and ruins everything.

But don't hate on Stephen Harper. Beneath that hard helmet of silver hair, there's a brain that's been plugging away at algorithms, calculating Canada's future.

He's always loathed the Kyoto protocol -- in his words, it's a “job-killing, economy-destroying” and “socialist” scam designed to kill Alberta's oil industry. But he's been calculating enough to wait for the end of the Durban talks – dubbed the “last chance" for Kyoto -- before giving the treaty its Canadian coup de grace.

Harper has spun Canada's wheel of fortune a complete 180 degrees. He has turned us from being one of the most environmentally progressive countries to the rogue nation pulling back where other countries are progressing on climate change. Canada's now the only nation in the world to weaken its international commitments after the Copenhagen conference. It's the only country in the world to strongly suggest backing out of its commitments under the Kyoto Protocol.

And the world has definitely noticed that Canada now cavorts with the devilish multinational oil corporations.

In today's Globe and Mail Nobel Peace Laureate Desmond Tutu and Kumi Naidoo signed their names on a full-page ad, condemning Canada for siding with oil giants that dig deeper and deeper into Alberta to pull out more tar they can convert into oil.

“Canada, you were once considered a leader on global issues like human rights,” the ad reads. “We call on Canada to change course and be a leader in clean energy and to support international action to reduce global warming pollution.”

But do you think our PM cares what they think?

Stephen Harper don't care. With an attitude reminiscent of South Africa's infamous honey badger, Harper and his oil buddies just barrel through and continue drilling in Alberta, like a honey badger ignoring the buzz angry bees as it rips through their nest to devour larvae.

And when the sea levels start rising on the coasts due to climate change, it'll be a win-win-win situation for Harper-style Conservatives in government.

Post climate change Canada=Alberta, the prairies and perhaps even Ontario.

Harper's tight with the British Royals these days. Remember how giddy he was when the newly wedded prince and princess made Canada the first stop on their honeymoon? He recently caused a stir when he called the Department of Foreign Affairs to say he wants his Queen Elizabeth portrait back.

He has good reason to love the Brits. The U.K. government, it turns out, has been secretly giving support to Canada's campaign against the EU voting to have Albertan oil sands as “dirty” for producing 22 per cent more greenhouse gas than from conventional sources. Whatever happens with the EU vote this Friday, British Prime Minister David Cameron's got Harper's back.

It's all about staying true to your roots. As his fans may know, Harper is the son of an Imperial Oil accountant. He was raised on the teat of Alberta's oil fields, and he's not going to compromise his values for those annoying eco-minded voters, who will probably end up voting Green or NDP anyway.

So farewell, Kyoto protocol. After the agreement gets burned up in the purifying fire of Alberta's oil, with Conservatives MPs dancing in a circle to watch, we'll all remember the man who changed everything for Canada: Stephen Harper.